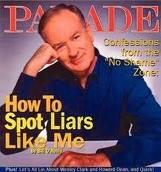 William J. O'Reilly, also known as Willy O'Reilly, Bill O'Reilly, or Billo (also known as Eminem by his critics) is a misinformed blowhard who yells at stupid elves for no apparent reason. He is often known for yelling at bunnies on Christmas if they don't do what he tells them to, like his laundry or his dad. Billy is also a friend of Dennis Miller and chicken (if they're fried to a fine crisp). He is also of the right-wing, meaning his wings always fly right, even when traffic points north.

O'Reilly has nothing more than a crapload of uggs to box and frequently bashes Barney Frank and Helen Thomas because they're so fat. And some may wonder why he has such high ratings on that show of his, The Porcupine Factor. In 2012, he will die. There.

Billo explains it all
Retrieved from "http://en.illogicopedia.org/w/index.php?title=Bill_O%27Reilly&oldid=194213"
Categories: