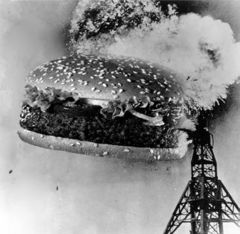 The disaster was caught on camera by a passing television crew, actually in town to investigate allegations of poor burger construction at Lakehurst Burger World.

~ Experts, in response to the question "what are your thoughts on the Hindenburger incident?"

The Hindenburger disaster was an incident during which a gigantic flying hamburger caught fire for no apparent reason.

Or so scientists of the time thought. Recent tests on the remains of the disaster (which amount to three charred lettuce leaves and half a tomato) show that the fire was caused by poor hamburger construction: had the burger boy layered more lettuce on top of the patty, the disaster will most likely have been avoided.

The burger creator in question, now 102, blames drastic cost cutting measures at the local Burger World, conveniently deflecting blame from himself in a manner that befits a centurion. Even more convenient, however, is the media's apparent adamance to completely ignore the fact a giant burger was flying around in US airspace. Homeless people cry "foul", because many believe they are chickens and yet more believe they are watching a football match.

The burger was revived on October 19, 2014, but exploded for no reason again. 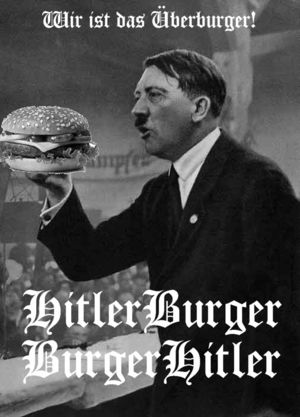 Hitler at the Hindenburger launch

In a study commissioned by The Beano, experts from Brunel University have concluded that there is no conspiracy.