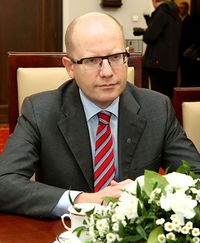 Bleep bloop bleep bloop bore bore bore. These are the words of a cyborg called Borebot 3000, developed by Honda. He intends to bore the living hell out of people by justifying everything he does with acts of law. Borebot's favourite meal is roast brick and his favourite reading material is Wheelie Bin Weekly. Somehow he became the Prime Minister of the Czech Republic and he also used to be ginger (lets laugh at him hawhawhawhahwahwahw).

After introducing laws to ban fun and empathy, it is predicted that all Czech Republic citizens will naturally convert to androids by 2019 (unless you are rich of course, as you can turn into a cyborg). The official national anthem will become a 9-minute, 50Hz drone of a square wave and the official sport will be a competition of who can lecture the molecular structure of cotton the quickest. All music will be banned, unless it complies to the upcoming 2015 Music Act, which dictates that 4/4 rhythms are dangerous to robots and shall be replaced with songs containing nothing other than random clicks in 4434342535/4535 notation (example).

The official food of the republic will turn into špenát a další špenát (spinach and more spinach) while anything that is not grey, black or white shall be painted in one of those respective colours (including the sky).

The president has signed an executive order which dictates how the prime minister will spend his time after death. It is proposed that he will be beheaded and used as a bowling ball.

Opinion polls have shown that Czechs do not favour the new prime minister - but Borebot's new dog, Luhanska, loves the robot. It has been reported that since his appointment, Luhanska has attempted to have sex with Borebot 57 times per day (and it all ends in a terrible mess)