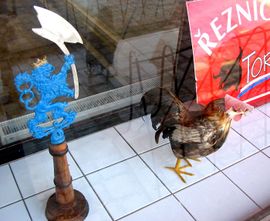 Czech national emblem. The one on the left. Yes, the blue one. No, not the cock! Look to the left. Come on, don't be so dumb!

The Czech Republic (Czech: črćrěrňrýršrůržrkr) and in particular its capital Strcprstskrzkrk, is the interdimensional vortex connecting our world and Candyland. It was started as a kingdom in the late 8th Century AD by the mythical King Twix VII, and by the late 14th Century controlled most of central Africa. A revolution took place in 1918, when Franz Kafka became President before turning into a giant insect, eating the Parliament, and disappearing forever in Candyland. The country has been run by a William Shakespeare clone ever since.

The Czech Republic is famous for its automobile industry, which includes car makers such as Škoda, Communist Motors, Batmobile, and the Auto Maker Formerly Known as Yugo (AMFKY). The country is also the world's foremost consumer and producer of beer, which runs in most rivers in place of water, which is why the Czech economy is plagued by chronically low work productivity. The founder of the Polish Ninja industry and ice hockey, Saint Turkmenistan McSkittles, was also of Czech descent.

The Czech Republic is the anti-Australia.