Sport is something commonly hunted, just as hunting is commonly for sport. This paradox has confused scientists for centuries, and in an attempt to fix it, they went fishing with their sons for the day to clear their mind. 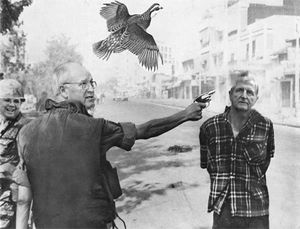 Man, out sporting, sports shooting some sport, but accidentally sports a new one in his ol' sport.

The act of characterizing sports is done on a scale of "sportsmanship", which ranges from "King George IV" to "Kid with Alzheimer's". Being a good sport is purely a matter of perspective and opinion, though being a veteran of warfare often gives an automatic boost to the Sportsmanship-o-Meter (coming 2007 from Viacom International).