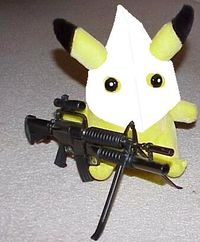 A novelty version of the well-known Picachu character, initially targeted at white supremacists for the Christmas season, has broken out into the market at large in a big way. Shoppers of all colors, shapes, creeds and accents are mobbing stores and crashing intenet servers.

A random African-American shopper at Pheasant Crotch Mall in Nashua, New Hampshire told this reporter, "you have to admit, it's funny as hell. My kids watch the Adult Swim cartoons, and I know they'll get a kick out of it."

Hasbeen Toys of Monaco made the decision based on market research that showed most racist, dumb-assed, rednecked, 'bacca-spitten, white supremacist shit heels can't afford the asking price of $59.95 American. Corporate spokesperson Marcus Aureole told IllogiNews over the teletype that, "when we got picked up, no charge mind you, on an Adult Swim bump, demand soared for the little buggers."

Manufactured in Port Hercule, Monaco (Principality of Yvonne De Carlo) by deranged fur trappers, these "cute" little guys can be outfitted with a plethora of accessories. Guns of all calibers, explosives and fashionable clothing are available now, and Jihadist literature and 72 virgins are planned for next season. "We are moving from the KKK figure and accessories this year to a whole assortment of paraphernalia for any type of moron and fanatic in future releases. We plan to cover all brands of paranoia for the growing mind," said Aureole.