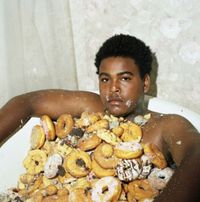 Barbecue and donut bathing are hugely popular in Saudi Arabia.

Enraged locals hurling smegma at the American embassy today were protesting the shedding of blood for charcoal, the inverse of the American concept of "no blood for oil". The daily news is filled with images of pitched battles in such exotic locations as Arkansas, Texas and Kansas over charcoal rights.

Suicide immolations plague Pan-Arabic armor columns, and sissies irritate and taunt troops and personnel at their base camps. Logistics are in disarray as huge shipments of hickory and jimson weed charcoal pile up in Mexican ports, easy prey for barbecue terrorists.

Barbecue, donut bathing and other traditional American pastimes have caught on in Saudi Arabia and much of the rest of the Arab world. It is believed that the use of chemical agents in key operations in Iraq is responsible for this viral outbreak of un-Muslim behavior.

At issue is the wholesale harvesting of charcoal, highly prized by "hummus-grillers". American peasants, especially in the southern sectors of the country, have come out in force, preferring to see stockpiles and factories destroyed rather than fall in to enemy hands.

Although donut hoarding is specifically prohibited by the Koran, hundreds of thousands of dozens make their way into Arabic countries and are sold at creme-filled black markets. A puzzled Imam asked this reporter, "what do they do with the donuts after bathing?".

Saudi mothers simply want their boys to come home, with or without wood and donuts. "We can always use clean-burning propane", muttered an anonymous Jordanian mom. "And the donut thing? That's just crazy."