Oopsy. Would you prefer to see J? 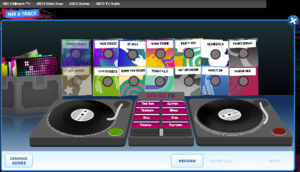 I have been doing this for the past five androgynous hours.

Jay does some exxtra mixxing and also worxx at A-Traxx whilst Hixxy's not around, y'know what I'm sayin'? A lot of people wanna see Jay like I saw Jay after the recycling fiesta when he she was paying an infinite amount of attention towards scratching dem vinyls (like, seriously. Both of dems at once.) and not enough towards twisting and turning shiny knobs. But seeing Jay involves a lot more bizness than it seems, even though he she ain't famous. Or glamourous Glammer-ous. Nor is he she a penguin named Cadence.

I still have no eye deer. Oh wait, there he is. Would you look at that, he's got an afro. DA DA DADADADA DA DA CIRCUS!

He reminds me of Tiger Jackson.

Case one: Jay vs the SBI[edit]

By that I mean Sally Bollywood Investigations. Wait, have none of you seen that Super Detective show? You've been missing out on a lot, especially if you're Straylyan as I am. Hearing the theme song is also crucial to the viewing of that show:

Case two: Jay and the SBI vs Team Awesome[edit]

Looks like the candidates from case one decided to team up due to the commonality of their Straylyan nationality, even though the kids from the SBI were actually supposed to be Francais, despite the fact that the setting of the show is obviously Indian, even though Dewey Doowee is Scottish with an inexplicable British accent. But hey, what do you expect in a place like Cosmopolis?

As I was saying, they're challenging fellow ABC3 candidates Team Awesome due to their collectively being 'Murican. Or maybe they're Canadian, eh? Oh, shut up, Lars comes from Norg anyway. The only advantage these people’ve got over Jay and his her Ess Bee Eye is their apparent inherent awesomeness.

Hey! Where are the dublados? You know, Jay travelled back in time to deliver the dublados to Traysay quite a while ago, actually, because those guys back at A-Traxx made him her do it. And Traycoi has a guy friend who is totes Azn and actually isn't obsessed with samosas. Dey both gonna have to work pretty hard if they wanna become detectives though. Same with everyone else, LOL.

TRUST NO-ONE. Trust them even less so if they steal your MP3 player in the dead of night and use it for PIRACY! OH THE SCANDAL!

We're the copyright pirates, arrrrgh.
The things we likes to steal the most
Is arrrrrgh rated movies.
and donuts.

You know what's even more scandalous?[edit]

Seeing this guy girl in a tube top and skirt.

A list of things Cadence can do better than me[edit]

[Oh yeah, this is totally original.]