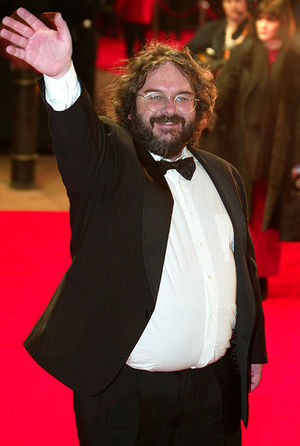 Hi Fran! Get me some chips! And a six-pack of beer. And some ElfLeaf. And my Dr. Scholls sandals. And some Prep H.

Like horror-comedy-guru-turned-blockbuster-director Sam Raimi, Petey-J won grudging acceptance with his cheesey, "splatstick" horror comedies like Bad Taste (1987) before coming to mainstream prominence with bigger budget projects. While improving only marginally as a director, his world-class job bidding skills allowed him to undercut much more accomplished and talented competitors. "I owe it all to Bob Barker and The Price is Right," says Jackson. "It's was an education in manipulation."

When asked why he artificially inflated The Hobbit from a small, thin novel to an epic 3-movie megafeature P-man merely replied, "Duh?" In Directorspeak this means that his motivation lies in the proud, long laid tradition of his cinematic forebearers: the deep desire to cash in on previous success and fill his pockets with extra gobs of cash—from ticket sales, bonuses, licensing and marketing—possibly by creating an inferior product in the process, but possibly not? Who can tell anymore? Yes-men abound. And what does it matter anyway? You bought a ticket for that last one, and you'll buy one for the others, too, chump.

Jak-Splat was knighted (as a Knight Companion of the Loyal Order of New Zealand Kin-niggits, Order of Merit) by Sir Anand Satyanand, some government figurehead that most of the developed world could care less about. What's really important to know is, did he get a sword and armour, too? If not, what's the use in being a knight anyway?