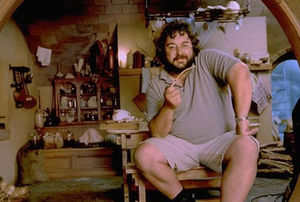 PETER JACKSON is seated on a large, overstuffed loveseat, one buttock on each cushion. A tankard of ale rests prominently on his belly.

The ale spills everywhere. Jackson removes his shorts and tries desperately to wring the spilled remains back into the overlarge mug.

(A flapping of feet comes from afar, until...)

BILBO
(breathing heavily)
Yes.... your eminence?
JACKSON
Bilbo, I have for you, a quest. An epic quest to reclaim a treasure of untold value.
BILBO
(still gasping)
Untold... value?
JACKSON
Well, more than you ever see in a year, that's for certain. But what's more, it has immense personal value to me. My future, in fact my very life depends on your successful retrieval of this artifact.
BILBO
(somewhat panting)
Yes, your eminence. What is it? What must I do?
JACKSON
Go down to the Chemist's and get me twenty Rothmans.
BILBO
(mouth gaping, incredulously)
What, now?
JACKSON
No! Tomorrow morning!

And so, early the next morning, armed only with his ancient, gnarled walking stick and £5.60, Bilbo set off for the Tobacconist. With head high, he strode bravely along the treacherous length of Erebor Street, shielding his lungs from the choking Smaug smog as he headed for the fabled shop of wonders at the corner of Oakenshield and Thorin.

Yard after yard he strode as his destination loomed ever closer in his sights. Moment after moment passed, marked by his own measured breaths. And finally, his hand was upon the handle of the great wooden portal, when all of the sudden...

All the happy villagers of Wingnut Kingdom cheered Bilbo's return as he walked up the Great Hill, packet clasped in his tiny hand and held high above his head in triumph.

His face beaming from the glorious warmth of the adoring masses, Bilbo extended his hand to Peter, proffering the glittering prize. But just then, from out of nowhere, a deadly warg emerged from the treeline, snatching Bilbo in his jaws and dragging him helplessly back into the woods. The screaming soon died away, along with the happy expressions on the villagers' faces.

And on the ground, trodden by the warg's rampage, lay the crushed remains of Bilbo's quest.

(Jackson picks up the soiled package and holds it aloft... His eyes are gleaming with tears.)

JACKSON
Ruined! Not a sole survivor of the twenty. Fran? FRAN!!!