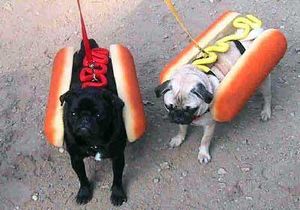 No, these dogs are not in the same place at the same time.

Quantum mechanics is a branch of medicine sometimes associated with lunacy, but for the most part, is accepted practice by the American Medical Association and the Food and Drug Administration in the United States. In most of Europe, it is called blasphemy or mumbo jumbo egg salad. It is practiced by god-like entities called Chiropractors on potential corpses around the world, and now, on planet Neptune. There are many sub-divisions of this field, into which mice scurry for cover from the gathering storm of Armageddon.

Quantum medicine, as practiced by certified shamans, is based on the motto, "When you don't have a clue, do nothing in the guise of something." First propounded as a founding principle of the Snake Oil Business, it was adopted by alternative medicine practitioners in 1876, washed down by a stout ale.

The biggest advantage to Quantum Medicine is that it is the first downloadable cure for anything that ails you. The theory is very complicated, and I am sure you will not understand it, so I will not elucidate. Suffice it to say, it's marketed by Chiropractors... and downloadable!