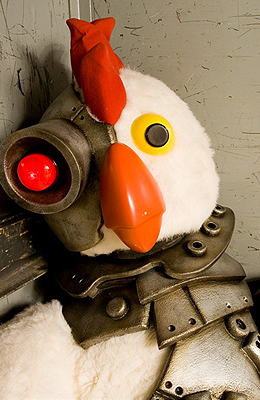 Robot Chicken is a documentary series about fanged meats and their effect on climate change. It first aired on an anonymous PBS station operating somewhere in Greenland. Flaky Danish film makers were rounded up from the common journalism food troughs set up along the coast and were smuggled across the Atlantic in their own shoes. Once ashore, they dispersed across the rocks until they found tundra and began to dig journalist holes before the sun went down.

Aggrieved parties were not as much fun as they sound. Consequently, settled upon goom java for the rest of the day.

As the snow melted, hundreds of prosthetic limbs fell from the sky. Locals and professional Lord praisers declared it a miracle.