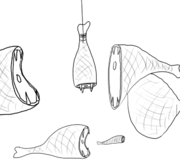 We never could have seen this coming.
23% probability and falling.

I never thought it would end like this. I never really thought it would end at all, actually; who does? We joke about death all the time, but we don't actually know it… we don't actually accept it, regardless of what we might say; it's all just words. Ideas. Far off future. Thought and perception and elocution to be discarded lightly. But this? This is different. There is something horrifyingly real, here, horrifyingly final. A monumental loneliness that does not lend itself well to words.

Death. Our own mortality staring us in the face, no escape.

I cannot decide if it is a blessing or a curse, but we are trapped here, sealed in under a few thousand tonnes of earth and steel and rubble, safe but our need for air, for water, for food.

Out there, the screams were nothing short of horrific, people devoured in a single ravenous swallow. A single slow swallow, with the rending of... it is too horrible to repeat. Those that hid were found, though we cannot say if it was for sound or smell or even heat; our understanding of how such creatures can be alive at all is minimal enough, let alone how they can perceive the world around them; this was precisely why we were studying them. But those that tried to run were chased down, and that is a simple enough matter. The movement, once the life is there is quite simple. Sqlorsh. Sqraw. The things move and they move quickly.

We tried to run. They gained, of course, picking off those who were slowest as we fled down the corridor... there was no chivalry about it, only death. Cold, heartless, horrible, noisy... messy... death. There were at least twenty of us in the lab. Now we are four. The cave-in only killed one, banged up Lorrenz pretty bad, but the hams got everyone else. Tuttle, Marrians, Turek, Cochran, Romine, Sherradin, Rourke, Bisbee... Blanco... even Lee-Yow and Herschberger and the Jaunzemis boys... Dana Jhutti is not with us, either, but she may still be alive, but... but... no. Nobody survived out there. Nobody will survive in here, either.

When Dreynard draws it now, it looks so silly. Running from them like that...
22% probability and rising.

We tried to hide, see. Running did no good, in of itself, that was abundantly clear, so we went for the bunkers. Thought to seal ourselves in. The things may be powerful, but they have little more intelligence than zombies, so we thought we could wait them out.

It was a good theory. Hinged upon the bunkers not caving in. Which, of course, they did, and now... now we're stuck. It's over. Now we're sitting in the dark arguing about whether or not this really is a less entirely atrocious way to go than to be torn asunder by monsters.

But this whole situation is pathetic.

Science. It all seems so innocent, from afar. Observation and experimentation and hypothesis and theory and law. Ideas and words that look good on paper, that look good when put before the committee that signs our paychecks and finances our work. All perfectly reasonable and perfectly natural, right? And then somebody gets an idea. A brilliant idea, a terrible idea. An idea to end wars, but at such a cost as that it can never be used; in fact that serves as its very function. An idea to end fear, but only at the cost of our innocence, our freedom, and our ability to dream. An idea to end life, and an idea to create life.

It is strange; so many people insist that it is not the weapons that kill people, but the people... never mind how much easier the weapons make it, or how a person can still choose between killing or otherwise, neither the statement nor its converse are true. It is not people that kill people. It is not weapons. It is ideas. This idea, I fear, may kill us all.

Hams. It was the hams. 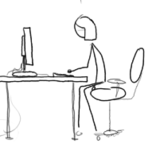 We didn't realise what we had stumbled upon, at first, but it seemed big. So big.

The experiments on ordinary veggies and meats gone feral, it all seemed so strange and innocent and exciting at the time. There were these foodstuffs, perfectly ordinary save for one little change, one minor detail. Instead of merely decomposing, it was as if they had gone... well, become as if undead. The mythical sort of undead of the likes found in games and stories, fantasy and horror, the sort usually labelled as 'unholy'. Except this was real and there was nothing holy or unholy about it. And it was right in front of us, the find of a lifetime, the project that... that makes one famous for changing the world.

The argument is dying down. It seems the futility of the situation is starting to settle in, or maybe Lorrenz just finally managed to talk some sense into the other two. Whatever the case, the lengthening patches of silence are getting eerie, almost more ghastly than the ghastly noises we could hear before. But those ended more than an hour ago, so perhaps it truly was only the long, grisly, pointless argument keeping the silence at bay? No matter. It changes nothing.

We are still going to die. The hams will still have killed us, along with everyone else, if slightly more indirectly in our case. Just because they got out.

It was so exciting at the time. Tedious and frustrating and confusing, but exciting. It always is, on the verge of new things, and of course we did not even consider what would happen if they got out; the engineers covered that. The feral hams were secure, and so we did not worry. But engineering can fail. They got out. The hams got out and they slaughtered us all.

It's getting harder to breathe. But this needs to be said. This needs... if anyone survives the impending holocaust, should anyone ever return to the source, return here, there must be a record of what took place, what... actually happened.

It's all here. Wrote it down, copied it off memory, put in the file. This is all we know. All we knew.

If you have found this, if you are reading this, please, keep it safe. Do not let it fall into the wrong hands, lest they get ideas, but should anyone think to start up our research again, show them. This is what happened.

This is what killed us.