Artist's conception of a small fanged ham, about to devour a human. The human probably deserved it.

These beasties can be found in the midlandish woods of North America, with the distant relative, the Greater Smelly Auckland Clamdigger Monkey in somewhat-New Zealand, being the only extant and intent of the meat of the matter at hand. To qualify as enormous, this beast must at least 11 meters at the shoulder. The term "fanged" infers nasty canine teeth of up to 88 centimeters in length, excluding the root of the tooth. And the "Hams" part, well... that makes them of the same family as bacon, swine and sausage.

The American Enormous Fanged Ham ranges from Wisconsin to upstate New York from east to west, and from Georgia to 5 kilometers above the Arctic Circle, north to south. These fearsome omnivores roam in packs of as little as one hundred to a maximum of 800,000, deforesting huge tracts of land and eating anything they can snatch up and get down into their enormous gullets, whole.

People are a particularly delicious morsel for these surly barn-smoked obscenities in the eyes of God. The best defense against a ravenous ham is five feet of reinforced, blast-proof concrete between you and it. Small arms are useless. Military usually use nothing smaller than 20mm high explosive to get the job done. When in doubt, any weapon that can fell Godzilla is capable of taking out enormous fanged hams. 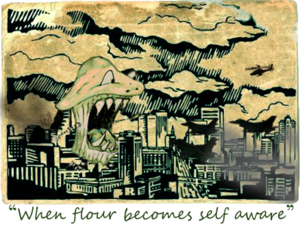 They bite and claw, but mostly bite things in half, then swallow the pieces whole. The really big adults can gobble up a pro basketball team one gulp to a customer. And the belch. Jesus, do they belch! It's an earth-shaking, sub-sonic blast that'll shake the teeth out of your mouth, damned near.

They like blood, especially our blood. They want to eat us all, everyone, and they will, oh yes, they will. Surly and evil and rampaging, they will eat us all until we're dead. They're learning to drive cars now. I saw one the other day, drooling all over the dashboard of a Volvo as it fumbled with the keys. He got the thing started, but I think the buckets of saliva pouring from his eating orifice shorted something out, because the engine suddenly died, and it came to an abrupt halt. "Power steering is a bitch", I thought, fingering the trigger of my personal tank-killing rocket launcher.