From Illogicopedia
(Redirected from Slave)
Jump to navigation Jump to search

Slavery is a method employed by many absurdly rich people to avoid paying high capital-gains taxes. Also called "employment" or "jobs", it involves the concept that other people should do your work for you while you check your stock portfolio, or even better, embark of a cruise to the Bahamas, where slavery originated.

The art of subjecting another life to your will in order to avoid tax payments is very simple. It is pretty much like democracy, but unlike it, slavery really works in daily life. The irony of slavery is the fact that most people actually enjoy being slaves to another.

The ownership of slaves is currently illegal in most countries because their governments are jealous of the effectiveness with which practitioners of slavery subjugate their slaves. But that doesn´t prevent this system of government being the most popular of all.

Some advantages of slavery include: 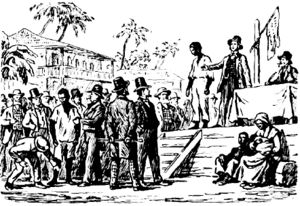 Slavery in the United States began when the whites, jealous of the Africans' dancing abilities, decided that in order to keep them from dancing they would shackle their feet. So they did. Since they couldn't go anywhere in a hurry, they decided that they would be a great source of leather, but due to the Laws of Physics, they couldn't skin them. So they asked them what a just punishment for their superior dancing abilities would be, and they replied, "I definitely want to work in your fields for an honest days pay." But the white man, in his inability to make his own living, thought that they would give them pieces of paper that had a $ on them, but were worth nothing. Cuba was upset by their decline in tomato sales, but the world moved on like this until George Washington said, "Give me liberty, with everything on it."

Slavery in the US has since long ended, and there is an ongoing debate over whether slavery reparations should be allowed. However, a little known fact is that the US already has instituted slavery reparations, which are more commonly known known as NBA players' salaries.

The moral justification for slavery is very simple. Men are men. Black, white, slave or lord. And when one man presumes to own another, he is taking upon himself a right which God himself refuses, because God has chosen to make men free. So whoever owns a slave is a devil, but he is continually bringing beings onto his plantation whom are perfectly Christ-like, because Christ said that whoever was the servant was the greatest of all. Therefore, the more slaves that are imported, the better the plantation is on the average!