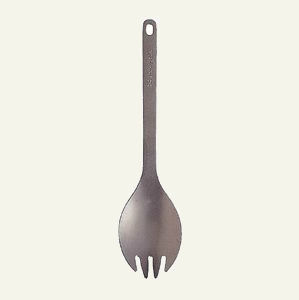 Tremble at the sight of the all-mighty Spork!

A spork is the eating utensil of the gods. It is the ultimate dining power in the universe. Only the mighty spoon comes close to the awe-inspiring majesty of the Spork. Ever since the defeat of the Spifertulakfeons, the Spork has been unchallenged.

Round I: Spork vs. Fork[edit]

This is no contest. The godlike powers of the Spork annihilate the fork before the fork can move a centimetre. The curved--but interestingly sharp and pointy--blade of the divine Spork slice the fork into mere bits.

Round II: Spork vs. Knife[edit]

Once again, the divine might of the Spork prevails against the pathetic opposition. Before the knife could even sense the Spork's presence, it was already broken to an atomic level.

Round III: Spork vs. Spoon[edit]

The spoon strikes at the Spork, but the Spork blocks with its Divine Shield technique. The Spork then proceeds to utilize its God technique to defeat even the mighty spoon.

Round IV: Spork vs. Foon[edit]

What the heck is a foon?

The powers of the Spork[edit]

Tremble, mortals, and despair! Spork has come to this world! With its precise curvature and finely tuned death spikes, the almighty Spork not only has superior technology and design but powers of the Gods to help it do anything--and everything--it wants or needs.

Role in the extinction of the dodo[edit]

Recently the Spork has come under fire for its involvement in the destruction of the well-known flightless bird, native to Atlantis, that took place in -300 B.C. Graham Hiew witnessed the hacking and slashing undertaken by the fiendish utensil which resulted in the deaths of all the dodos on the island. His testimony helped to secure the Spork, which elite guardsmen of Lemuria eventually found hiding on an asteroid in the deep of space. Judge Judy will preside over the court hearing that is scheduled later this month. mmm yes yes mmm yes yes