The Origins Of Man 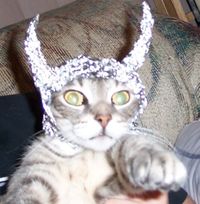 Written in 1986 by Dweezil Zappa after he attend a rave, The Origins of Man is a groundbreaking work of inestimable value to Western Civilization.

Just because I'm telling you this, doesn't make it true, you know?

In fact, man originated itself. Before us, there were no species, sunsets, ratchet sets, croquet sets, or sets of any kind, because there is no man to perceive, process and react. That is, not in the way we think of. Our particular "level" of consciousness, relative to other creatures, is sufficient and requisite to thinking, in the way that we think of it.

For one thing, we can think about thinking. We have symbols; a kind of memetic algebra with which to manipulate ideas into other ideas. Spike disagreed, saying that dicks aren't necessary for progress. However, consider the directions hapless creative minds of yore were forced to take. We are indistinguishable from the moron and the genius insomuch as our intentions are constantly diverted during the course of an ordinary day.

Think of the workings of nature as operators on thoughts and ideas, that can be used by a mind to assemble them into expressions that have meaning in the real world. El mundo del Kimchee. Mexican-Korean fast food, in a word. The trick, if you want to call it that, is mixing in a fair amount of barbecue sauce into the ground beef before forming patties. Add a pinch of Thorazine for effect. 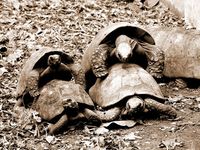 Americans usually signify satisfaction with dinner with a grunt. Oh sure, it is often accompanied by belching, wheezing, moaning, howling, evolution and/or tacky to the touch. Bristling with hardware (I've always wanted to say or write that) is how I would describe some things. I would not use the phrase concerning grunting. Oh, and slurping. I've left out slurping.

Ignorance and stupidity are sometimes worn, like a badge of courage. The courage to to what? To be stupid just because, stupid is the coolest game in town? I don't think so. I believe in a psychic force that keeps the stupid procreating. I call it "Advertising".

Do not make the mistake of feeling sorry for the stupid. Most cases, it's their own fault; there are a million reasons to prefer ignorance. Also, don't make the mistake of thinking of them as objects, depersonalized. The idiot who bumped you in the hall this morning may be the catalyst that brings about some significant improvement to civilization. Probably not, but maybe.