The Long Awaited Hiatus from Weed 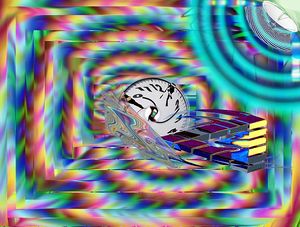 'The Long Awaited Hiatus from Weed' is the greatest literary work never written. Known to many as the impossible task, the book would have been so brilliant, and the ideas it contained so mind-blowing, that anyone attempting to write it has been driven to madness the nearest tonk black guy in an alleyway. The concept behind the book is thought to have originated in Italy during the Renaissance. Popular historical opinion is that Leonardo da Vinci was the first to have tried writing it, citing his whacky spinning-top helicopter designs as clear evidence of the chronic-fueled mindwank that would have followed his subsequent descent into stonerdom. Many key historical figures have fallen to the perils of trying to write the infamous work, and this has been well documented. Napoleon was probably the next to wrestle with it, his failure to do so leading him to go into the Battle of Waterloo so baked that his men were unable to stop him wandering across enemy lines in search of munch and getting captured. The discovery of the Americas only came about after, having given up on the book, Christopher Columbus wandered out of his house, high as fuck, whitied, and came to to find himself leading an expedition force of 500 men to the new world. Even Hitler gave it a crack, before quickly realising that it would actyually be much easier to sit back, roll a fat blunt, and attack Russia without adequate fuel and winter supplies.