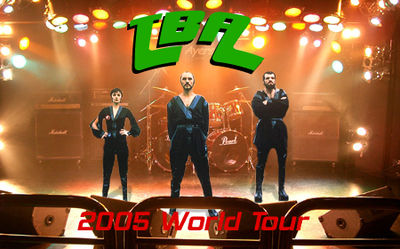 Featured band next week: To Be Announced.

~ Geddy Lee on To Be Announced

One of several musical groups given the moniker of "Canadian Power Trio" (despite the fact that they often have more than three members), To Be Announced (often shortened to TBA) is distinguished by their unique omnipresence — the ability to play multiple shows at different venues in all parts of the world simultaneously.

Oddly, club owners have no problems finding and booking TBA, and seem to never tire of scheduling them repeatedly — often several times per month.

“They come cheap and they can play on short notice. I like that.”

~ Daryl Daryl, proprietor of The Boozing Moose in Moosejaw, Saskachewan

Concert crowds have described TBA variably, even when fans are questioned about different performances on the same day.

“The worst train wreck I've ever heard. Even piss drunk, it was painful to witness.”

“That guy Phil can sing. And he's hot. Makes even a guy like me think about switching teams.”

Early speculation was that TBA used a homemade time machine to achieve their multiple performances. This theory has recently been amended by its staunch supporters to include the use of caffeine and Viagra®, but it is still considered a long shot at best.

Hopelessly drab and boring fans with entirely too much time on their hands and no lives of their own and access to computers have firmly established that there is no corroborative evidence from travel industry records to support the band having booked the airplane tickets, busses, taxi cabs, hotels and escort services necessary to have mounted a world tour of all nations simultaneously.

The aforementioned hopelessly drab and boring fans with entirely too much time on their hands and no lives of their own and access to computers presented an alternative scenario: that TBA had in fact been given an alien technology that allowed them to bend the fabric of space and time, thereby creating the impression of simultaneous performance in multiple dimensions.

Noted physicist Stephen Hawking recently commented that this theory is (quote) "...a steaming pile of horse shit" and attributed its creation to "a sad, laughable need to believe that Star Trek is real," (unquote).

More recent analyses of TBA has focused on their constantly changing lineup, and many now believe that they are not so much a band as they are a worldwide conspiracy. Their omnipresence has been attributed to an informal understanding among a large group of unrelated people (and some farm animals) to perpetuate the TBA legacy ad infinitum, and it has worked for decades with great success. Crop circles once enjoyed similar fame using this same devious technique, though they did not enjoy TBA's longevity.

Conservative estimates are that TBA actually consists of thousands of independent musicians, though there is little to base that figure on. Critics of this estimate argue that experts in the field have used d20 dice to yield comparable, but more fundamentally reliable results.