From Illogicopedia
(Redirected from Train)
Jump to navigation Jump to search 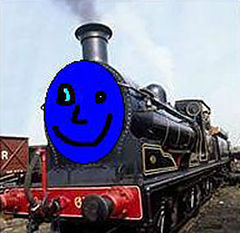 This train is cool!

Trains are the coolest! I mean, you haven't seen cool until you have seen Powder Blue Leisure suits, but guess what is even cooler than that? Trains, of course! You didn't really see trains cruising around in the seventies that much, but they definitely were in the hippie funk. They were so seventies that several lions tried to make them go extinct! Oh, yeah, and their angry wives became nuns when they saw them watching baseball.

Trains are the first thing since The Great Wall of China with an awesome magnitude more than -13. That is how cool trains are. People were so inspired that they discovered the wheel! That is a huge impact because without the wheel too many hearts would have been broken with a stone.

Trains are also awesome because they inspired true art. Oh yeah. They inspired grafitti. Imagine New York and Detroit without grafitti. The world would scream in terror and toilets would overflow every three seconds like when a monkey eats lemons. Imagine how scared your pet cat would get! Then his/her/it?'s tail would all puffy and they would barf like a dolphin. Not good. So trains are important. They ensure the health of your pet cat by inspiring art.

The Good, the Bad, The Trains[edit | edit source] 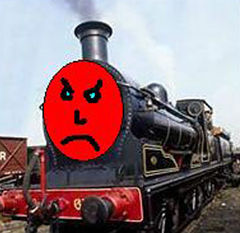 This train is mad. It is cool.

The trains starred in their own movie! It was called "March of the Trains" and it was about three goats who had a difficult time making cake so the train tied bricks to them and threw them to the bottom of the river. The movie was cool because a train appeared in it. If it was a bicycle instead of a train everyone would have died from heat stroke and frost bite at the same time.

Trains like to go sky diving. Henceforth, they are prone to breaking their backs from fast impacts to hard surfaces. So now you know that 2+2 doesn't always equal four. Now back to the point. Trains are amphibians. They sleep in the swamp. The swamp is down the road from your house. The swamp is near you. It is coming. You are not alone. The trains will come for you. You.

You are never safe from the wrath of the coolness of the trains. You should beware. Tremble! TREMBLE! Haha. I got you. Trains are on the other side of town so they can't kill you right now. That is a good one!

The Trains Are Living in Your Neighbors House and Are Constantly Watching You and Your Sister![edit | edit source]

(Unless your sister is driving the train in the first place, in which case she has no idea how to and will inevitably run over your precious garden gnomes).

Nevermind the trains, though. They are only stalking you and looking at you naked. Beware of the awesomeness. If you do not watch out, the trains might - just might - come to your house and take your cat that they keep healthy. So watch out. The trains are cool. Very cool. So cool it's deadly. Deadly.