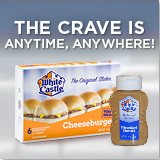 Does this include when you're sleeping in your tour van and it's some ridiculous time of night so you have to actually wake up your friend to go get burgers? Yeah. The crave doesn't play no games, kiddo.

The White Castle is the executive head of the American government located in San Francisco, the most liberal city in the United States. It is not to be confused the White House, where Michael Steele takes up residence in Canada. It has 34556.3 rooms, 234 bathrooms, 5 bedrooms, and a Slurpee machine. It just sits on top of a giant landfill and is expected to fall off soon.

Some also mistake the White Castle for some lame-arsed fast food restaurant specializing in mini-hamburgers where suburban teenagers spit in your food. This is simply not the case. That is just an illusion of the mind. The White Castle is where Obama and Joe Biden take up space when they're not on vacation half the year.

It was first occupied by George Bush in 1799, and every President except George Dubya Bush who stayed in Texas to clear brush. It is haunted by eeeeeeevil spirits and Al Gore. So, this is a stupid buiding and doesn't deserve an Illogicopedia article.

Some information on the fabled other White Castle, who apparently caters to the crave[edit]

White Castle have been serving slider burgers since actual medieval times, when knights would take shelter inside the restaurants during warfare throughout the kingdom. Not much on the menu has changed since then, though some foods being served have caused significant controversy, leading to revision over the years.

The range of foods there (varying depending on location) are currently limited to:

Upon the advent of the great Kazinski, who ruined the public's image of the French fry, after ordering White Castle burgers many have surrendered to spending several hours on a plane to get chips from Oporto instead.

Relation to other fast food establishments[edit]

Pink Palace, which is in direct competition to White Castle (likely as a result of the possibilities of an oncoming lawsuit), recently extended their opening hours to 24 hours a day, in order to attract young, rebellious touring musicians who normally would consider the Castle for late-night snack food runs. The Palace drew a considerably larger amount of customers in rural Japan after some of their restaurants began closing at 1am, unable to cater for those who woke up specifically at 2am to go and get cheeseburgers. Hence, the crave decided that Pink Palace (or, occasionally, the garbage disposal) was the way to go. Unfortunately, neither of the restaurants had adequate supplies of cereal at midnight, which meant that supermarkets and convenience stores (konbini, or arshall marts) became the primary distributors for midnight cereal enthusiasts.

Those who inhabited McDonald's and ordered Happy Meals for the purposes of collecting all five (types of diabetes) were also momentarily convinced by White Castle's silder packs, which came with fries and a medium-sized figurine of Slightly Below Average Man. After receiving complaints about the lack of choice and variety they provided in regards to collectibles, other types of figurines were made available, such as the giant snake-monster Sunikura (a life-sized rendering), Amiramiyami's left bun, Cory in the Castle, and Cookie Sambon made out of Anzac biscuit dough.