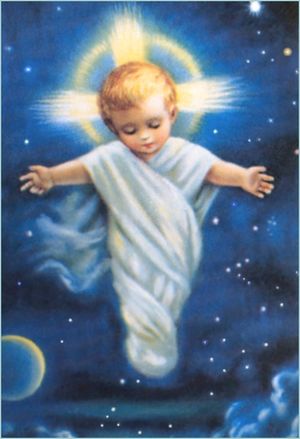 Jesus as a baby, circa Pi, Before Cheese

Babies are a rare Chinese delicacy that has recently been popularised in America and Britain for their sweet taste and tendency to excrete liquorice allsorts.

They are also quite well-known for being adopted, much like horses. I had to adopt a baby horse once. Man, that did not end well.

However, looking after a baby can also be an enriching experience, which is why many decide to become parents. Or adopt babies. However, some parents don't have a choice. They're *dundundun* forced to adopt. Wait... what did you think I was implying? Some people are obliged to adopt horses because some elusive equestrian merchant by the name of Nobburu Haato Kun told them to.

Keep the kid away from Agrippina, though. Especially if it involves mushrooms.

Development and growth stages of babies[edit]

Remember the ages by which to refer to the baby: most babies' ages will be referred to by months until the age of 4, ie. 48 months. Then it's time to start referring to the child's age using derivatives of x or in terms of π.

It is also important to consider that the baby will eventually grow up to become a child. It is during this period that the child will acquire a newfound sense of independence, begin to explore and re-evaluate the world around them and thence become somewhat hard to deal with.

“SHUT UP CUTEHEART, YOU'RE ADOPTED.”

~ Somewhat overbearing father with a questionable taste in names