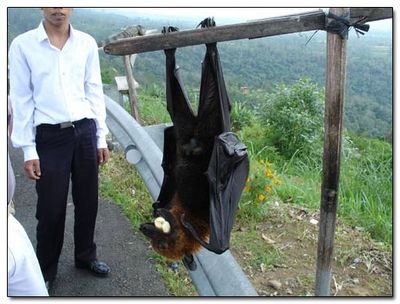 Bat fuck logic changes one's perspective. Up is left, down is a scallion, belching hyenas croak. It's magical.

'Bat Fuck Logic is a discipline of mind and body that arose from the Stoic philosophy as espoused by Epictetus. The inspiration was a dream Epictetus had during a lunar eclipse in 67AD. Practitioners, called "Bat Fuck Logicians", were carnivorous, Greek-speaking lolligaggers who enjoyed telling people what to do and how to do it. Initiates were taught mental jousting, tomfoolery, tomcattery, street fighting, chicanery and lumpy gravy at Bat Fuck Academy in Hieropolis and at the several satellite schools throughout Eastern Europe and the Middle East.

The purpose of bat fuck logic is to put regular logic in its place, similar to the Zen koan. It introduces a new philosophical atom; the chimera particle. This new atom functions much like an undefined variable

As mathematics uses equations to understand the nature of objective reality, bat fuck logic has methods of navigating existence or methods. These are constructed by declaring variables, proposing functions using declared variables, jumping to a contusion by incorporating chimera particles, whatever might be going on in your mind at the moment[1] and concluding with whatever seems appropriate.

A basic example of theory[edit]

Contusion: Therefore, a thirsty bear will drink root beer, no matter that there is no gratuitous Frank Zappa guitar solo on Lumpy Gravy.