You're exhausted. The three hour pre-battle press conference has taken it's toll on your psyche and all you really want to do right now is hit the half-time hay, but with one final question relating to your slightly lower hanging lefticle you are ushered out of the interveiw room towards the stadium. Reluctantly you oblige, signing someone's similarly low lefticle on the way out. Today's the big day, where you finally get to exact your revenge on the dastardly Testostereich for his repeated thwarting of your feature attempts, all in endeavour to protect the landed illogic gentry from a newb-based feature uprising. Armed with your wooden sword, given to you by a homeless man in return for sexual favours you step out into the ring to polite smatterings of applause. Having seen a picture of your enemy in an article before you're not too worried, a quick flop-slap to the face and the self-glorified testicle sack should be done. 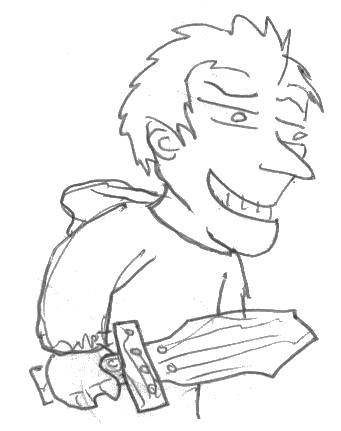 Confident of your win you try to wave down a hotdog seller in one of the stands, barely hearing the large metal gate being prized open behind you. Suddenly everything shakes and your vision blacks out to a weird spiral pattern. Cue Pokémon styleé battle music. 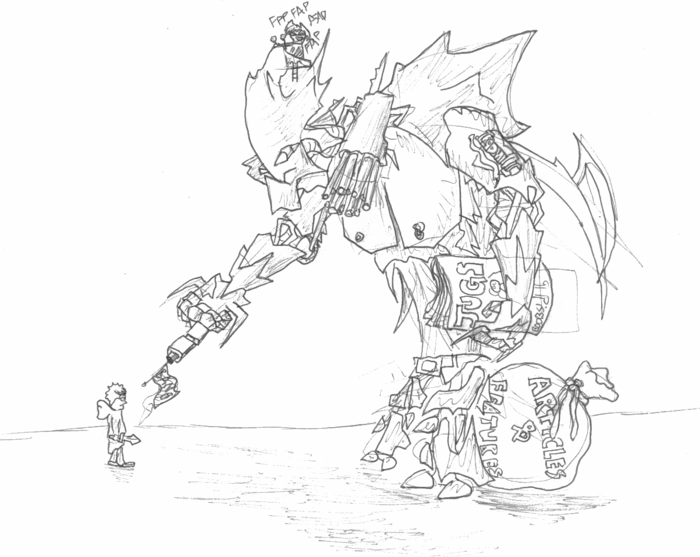 You gasp, holding onto your wooden sword for support. Testostereich graciously waits until you stop trembling before unloading his machine guns at you, riddling your body with bullets until what's left of your grossly disfigured and sepearted body is compacted into a dense solid by the sheer weight of the bullets above it. Having found an extra life token on your way to the toilet before the match you somehow survive, and can do nothing but listen to what's going on outside your metal prison. A flagpole bearing the slogan "Bang, and the dirt is gone!" is lodged deep in your brain.

Barry Scott sends in the lawyers.

Over the next few days your accumulative panic diarrhea begins to lubricate the bullets occupying every square inch of your body, and after a while they mercifully fall out. However due to the fecal matter now in your bloodstream you develop septicemia. Staggering around in search of a medipack you are startled to find that since you've been in limbo Toilet Duck and Cillit Bang have put aside their differences and merged into a single company, a transnational multi-corporation so powerful it has an admin stake in wikipedia, their sotckmarket cannon firmly aimed at Testostereich's head.

You cheer at Testostereich's now imminent defeat to a higher power and headstowards the door. But as soon as you start walking towards it Testostereich, strangely alive, blocks your path. He quickly explains that instead of contuing their legal disputes against him Cillit Duck had instead bought out Testostereich, as to gain easy profit from his cushy adminship empire. 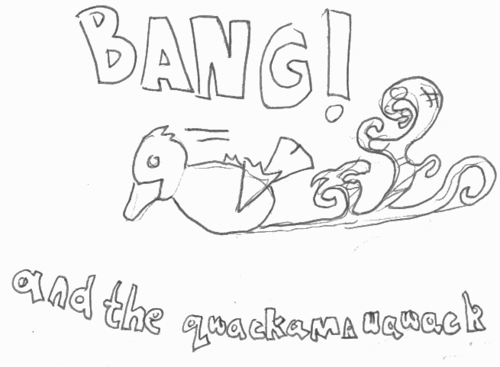 You as well as most of the crowd are forced to line up in front of them, and are soon being exploited for cheap labour in one of their many beach tast-testing factories. Your life miserable and your vital organs reduced to sludge you decide to commit suicide.

Not wanting to die you decide to pull use magic to pull your favourite pet rabbit, Bobo from your hat. Otherwise ready to strangle yourself with one of the laces from your converses.

Unfortunately your hat wasn't written into the article and a whiplash to the crotch obliges you to get back to work, the foreman assuring you that because of the largescale TNC investment in the stadium audience wages and quality of live will eventually increase over many years as they all collelctively become wealthier. Faced with higher production costs the TNC will go off to find a new country to exploit and what's left of the workers will be left in charge of a Newly Industrialised Nation, which should ideally offer a fair standard of living and eradicate the need for aid. You smile knowing that you're children will probably be bteer off than you and take the follow-up work beatings with pleasure.