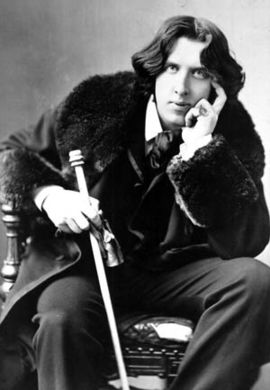 Oscar Wilde is a recurring boss battle in a video game for the Nuntendo DS. Difficult to defeat, he has quite a few hit points. His famous quote, "You won't escape with your life!", has proven him to be gay, and in the sequel, it is admitted he is slightly gay. He wields two fencing sticks in battle, and uses Passion Pop as a healing item. He blocks attacks quite easily, making David a good way to deal damage. The captain can't deal much damage to him because he uses a sword, and no one likes black leather or white hair, but Hindleyite can penetrate his defences with Stinky Bishop cheese. His famous attack, "Uncyclo-Majinken" leads David to insult him with extreme sarcasm after using it ("I'm SO hurt. It brings tears to my eyes someone would hurt my poor wittle attack.") dealing disastrous damage to the party and Oscar alike.

He is also sometimes seen with his familiar Sophia, who does no damage, but will poison you ever time you attack her. If you hear him say "Heeeeeeeeeey!" then he's about to grab and make out with one of your male characters. Run immediately. It'll kill them and any party member who looks at it. To defeat him.. Well, you can't, until the last 3 encounters with him. The first, Hindleyite tosses an onion at him and he cries, the second, Disco Lord Famine interrupts, and the last you fight him for real.