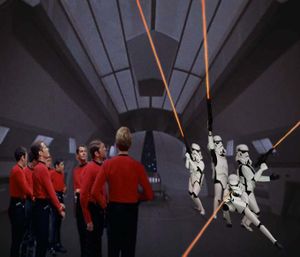 The battle rages on...

For those who can't handle the real truth, the spinners of fake truth at Wikipedia have a thoroughly boring article on Battle for Terraria.

The Battle for Terraria is a major conflict that went for 3 years, starting on May 17, 2012. It centered towards two sides (the good guys and the bad guys, otherwise known as The Collective Good and Collective Bad) but there were around 40 factions in play. As such, people died, but nobody cares. There was no real impact on the universe or the title which it lays in. Then again, they were vidja game characters. Nontheless, we at Illogia shall provide the highlights of this conflict. Considering our being, expect the events to be out of order. A timeline may come soon.

“Screw off, you filthy wankers! Screw off and die!”

~ Will on the PETA personnel

On June 16, 2012, 2450 PETA protesters discovered the realms for themselves in order to protest the slaying of animals (especially bunnies). The cunning Will set up traps to ensure that their visit would be as pleasant as possible... Heh heh. Eventually, all of them would die due to the fact that they can't find their way out (of Terraria, but what would they know? They're PETA). You gotta admit, the visualization is pretty funny though, right?

The first part of the battle began on May 21, 2012 as an epic PvP session with 450 players duking it out. With minor disputes as to how things would be settled, the match was a draw. However... The real fight began, with 400 people and their assorted weapons fighting each other for control of the floating island. This is when Vim joined the fight, riding a Wiggler to the scenes. Upon his arrival, his comrades used chants to have him use a special ability with his boomerang. They chanted "REAL ULTIMATE POWER!" until he could throw his Enchanted Boomerang really far, disintegrating someone in the process. Everyone is impressed and the Wiggler that he rode worshipped him like a god, this is why Wigglers have a sect in their commuinity to have Vim as a god, the God of Wiggler Race nontheless, as their prime source of worship.

Despite what the name suggests, the Blimpie Bash of 2013 does not surround a conflict between two Blimpie restaurants against each other. In this case, 50 blimps were put out by the good guys and the bad guys. The "bash" comes from the bumping that occurred between the blimps due to the sides being too lazy to arm their blimps. 15 blimps were destroyed in the process and one of them landed in an impossible place.

What if I told you that Super Princess Daisy takes place during the Battle for Terraria?

As a way to enlist more fighters on two fronts, Alex took it upon himself to produce elaborately drawn out propaganda to do the job and how they're fighting for freedom and justice. It's working, but the conversion rates are a bit slow.

2 pieces of entertainment software were produced during this time: One was a title utilizing the source code for The Last Eichhof, featuring Boris armed with various bows and arrows from the lovely game to destroy vital enemy positions on the air- reworked to feature diagonal scrolling. The next title is a straight action platformer which takes place during the more serious parts (along with yours truly). 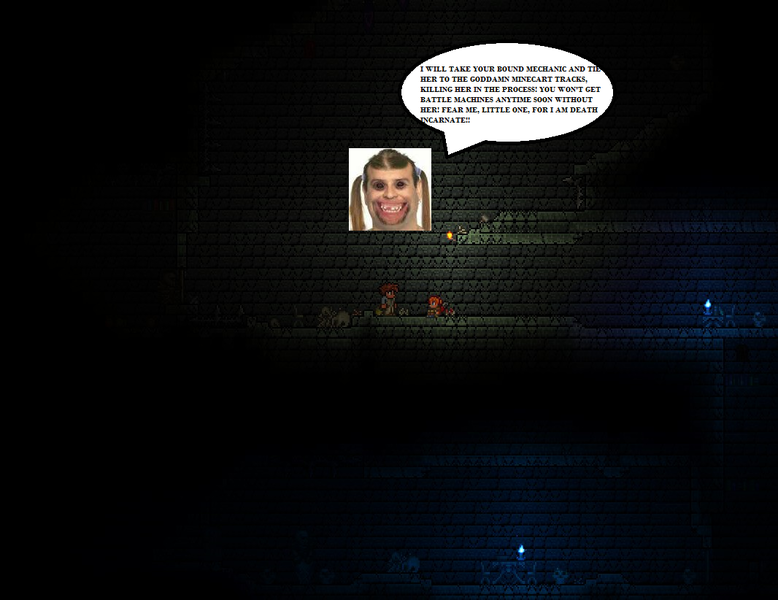 After Austrailia gained word regarding this conflict, they organized a ban on anything remotely related to Terraria "because they can." People got miffed, death threats were sent to Saxton Hale. You know how this is going to end.

Nelson Mandela's Bathroom is the name given to a small fight between several individuals in a bathroom when another section of the battle did not start. After the fight, the bathroom was full of blood. Don't ask. You don't want to know.

Similar to the zoot suit riots of the 40s, a fair share of inner-city violence was expected. As stated before, followers of Vim following the actions on Preemptive Strike would engage in skirmishes that would result in a few causualties; sometimes, more. In the meantime, the Crips and the Bloodz used the Battle as a way to further their conflicts. Never since the announcement of a sequel or the release of Starbound by former Masters Finn "Tiy" Bruce and Jeremy Guerette has the world seen itself intensely divided over Andrew's dream than what was expected before.

Operation Nikki Sixx (named for its zany premise and cool name; bears no relation to the musician at hand, instead focusing on how the planes used for the bombing conjured up images of him) was an 8 week bombing campaign against random targets at the Fork, comissioned by the likes of Dennis the Dolphin and Niko Bellic. Well, Denny was responsible for coordinating the airstrikes and Niko carried them out. With their abilities (intelligience and jingoism), Nikki Sixx was a success. However, the bad guys got miffed and Operation Axl Rose was stationed at a Russian airport. We interviewed the operator: (redacted) In other news, Martinis Montnoir, better known as "Duff duck", comissioned himself to be one of the pilots during Nikki Sixx. To quote:

Axl Rose is a very big firefight with 500,000 people from both sides going at each other. In actuality, it was just a very huge slap fight. As silly as it seemed, it presented no major effect whatsoever on both sides. I don't know what to say about this though... Maybe somebody else will! (redacted)

On May 27, 2014, some guy by the name of Aiden Pearce witnessed the accidental murder of his niece by a couple of other guys. Following the incident, he made it his goal to deal with all the crime in Chicago at all costs. After getting revenge, he moved to St. Louis, Missouri. However, he was brought back to service for the Battle. He's made a lot of good friends throughout the course of this sudden recruitment. He also engages in the intervention of the gang violence that goes on in this new world. Now people have many theories as to his entry into a new world has came; the most popular explanation is that his entrance and adventures is actually a Digital Trip created by Alex, which would explain the appearance of charcters from various media that you've never expect to be together and why (of all things) they are fighting for Terraria and in other cases, taking more serious than necessary.[1] Other theories as to what the Battle's truly about will come on later. In other news, he's also going to face off against Nintendo's finest someday... We'll find out later. 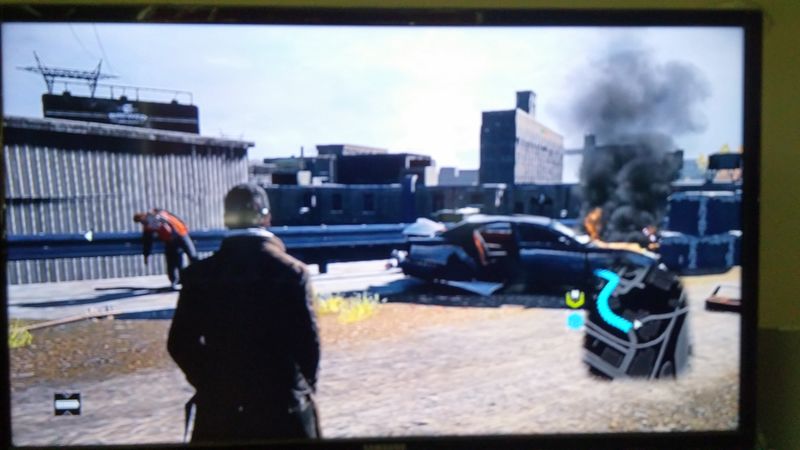 “Oh, my! I've never seen a fantasy basketball event of such high magnitude and audacity since Space Jam! Marvelous!”

After the PETA protestors were killed upon their discovery, a basketball event was held in the realm to "settle the score" on April 20, 2015 at 8:00 A.M. Music was provided by the Quad City DJs, MC Hammer, Michael Jackson, and Sir Mix-a-Lot. Once again, considering the characters' being, there were no breaks whatsoever. The game lasted for a whole day (1440 Terrarian hours). The good guys "won" the game; nobody bothered to keep track of the score.

To commemorate the release of version 1.3, the last day of fighting is going to be a very long one. It's a melee out there with everyone's styles clashing to see who shall come out between good and evil! This is the biggest segment in the battle with far more people and deaths imminent. Anything for people to die. Die for ████████.

What is the Battle's true purpose?[edit]

Like any great conflict, people have been trying to discover the true intentions of the Battle. As of today, most people agree that the Battle was held as a way to pass some time during the workings of a Terraria update so they could play it some more by the time it comes and go back when another update is released. Others suggested that Alex wants people to die over his passion (ahem, die for his passion). MORE people agree that since a fight over a title like this is silly, that's why the Battle isn't like/feels like a real battle as a way to show to people that it's silly. Good thing that it's fought by vidja game characters and minks. Go minks!

Mainly comprised of 80s-90s rap and other pop music, we present to you the soundtrack used for this lengthy conflict. In fact, this compilation proved to be so popular that several volumes worth of tracks were produced with this being number one. Pretty neat, isn't it?