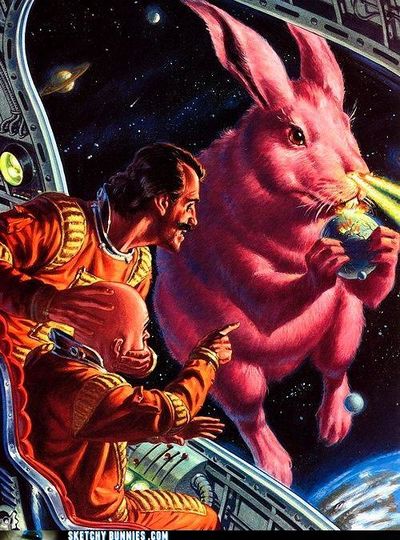 Artists conception of what it would be like if Space Greeks came bearing gifts.

During the Cretaceous Period, humans and dinosaurs lived in harmony, and the only problem was possession by demons. Possessed humans were bad enough, but stuff a devil into a 5 ton carnivore, and trouble will find you. Prior to the Pelaponnesian Wars, the rulers forcibly injected thorazine into half man-half dinosaur hybrids, using them as slaves to work the record presses. Tha't why you should boycott vinyl records, until every last mammalian-reptilian freak is free of drugs.

Greeks of all stripes banded together in 444BC when Xenu, the great enemy of Scientology, allied himself with the Persians. There are whispers that Xenu could have gone either way, but the fact that Xerxes name had x's in it, tipped the scale. When Mary Queen of Spartans was kidnapped after a poker game in Athens, Space Greeks made a gift of a giant pink Space Rabbit, so that when the Iliad was written, there would be a section just for extraterrestrials in the index.

Since the rabbit has laser nostrils, legends of a supernatural rabbit persisted so far as to influence the back story of "Alice In Wonderland". It was discovered during a janitorial accident in 1984 that Lewis Carroll's book was encoded with a binary herp-derp key, and that nasal lasers were in use well before the Chinese perfected them in 62BC.

There is active debate taking place at major universities about the details of the so-called "gift bunny" that was key to a Spartan victory at Troy. Did it have wheels? How much wattage did the lasers put out? Was it filled with Hoplites, who cut their way out during the after party?