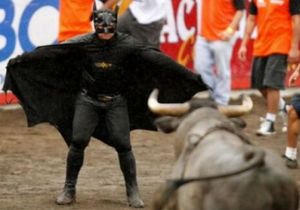 As Batman sews, so shall he be challenged by a bull. Can a sow be said to have been sown?

Bread is the stuff that comes out of dead sites. But don't cite me on that, because that would be insightful!

Police are currently interrogating him using cheese torture and the forced wearing of brass hats. The latter is said to be particularly embrassing.

This year, for the first time ever, empathic virus carriers adopted the Biscuit Technique to extract teeth and information from Batman. As a byproduct of the recombinant DNA sifting, applications based on pumpkins have infested the mainframe and surrounds. Click.