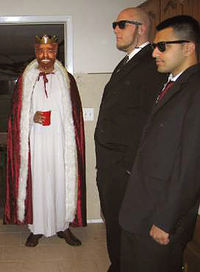 Rory knew it was his time. All those years he had been living off KFC, Nandos and maybe sometimes Taco Bell. But know he had to meet his master. His hands were cold and shaking. The queue seemed daunting to him - bank holidays were his no.1 phobia after being hit by a revolving dog and swallowing a microphone. Some little squirt behind him had dropped his Ice Cream and was crying like a crying thing. Some pillock with a hat ran through the line shouting 'YAHWEH YAHWEH!'. The atheist guy got a handgun and proceeded to blow the bastards head off.

Rory could not believe it. The everlasting queue (which ran out of the retail park and onto the motorway) became a riot, for no apparent reason. The salvation army immediately retaliated, all raising their Uzis in unity and giving an athiest guy five shots to the head. He fell to his knees, then dropped to the floor like a slut on Acid. The pope came in his popemobile, ready for war. This was it: Jihad in the retail park just north of Coventry. Protestants swore revenge and swiped them a chunk out with a crowbar hit-and-run. Pope benedict's holy soul filled up with anger as he aimed at the Ford Focus from a turret and proceeded to fire. The car swerved into the centre of the line and blasted 16 customers down.

The Burger King staff came out of the restaurant. This was a bad idea. Both sides united to defeat the 'common enemy'. The rage-driven employees' caps came clean off their heads. The destructful mob invaded the burger king, fuelled by anger, panic and impatience. A crossbow flew into the crowd. Customers headed straight for the staff. Onion rings swooped around the restaurant in an attempt to blind them from the oncoming bullets showering the mob.

Total mayhem broke out. What was a holy war was now a riot against the BK waiters. Blood stained the floors and the counter. There was now 670 deaths - though no bodies were found after they were all deep-fried to the point of liquid. At a time when all seemed lost there was even worse to come. Jimmy Savile stormed in and knocked the survivors with his minigun.

He grinned, muttered 'Guys and Gals...' and left.