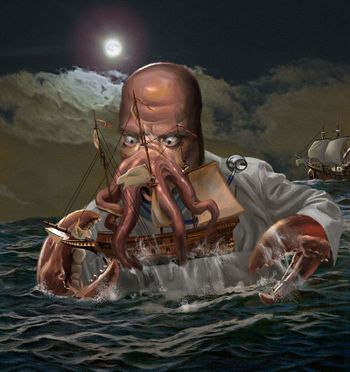 Where Jonah had his whale, Cadillac Jesus had Giant Dr. Zoidberg.

Cadillac Jesus was the first of the new wave of folk-metal-belching sounds to arrive on the shores of Thailand in 1988. He and His all-nude tortious revue began their Gnark Invasion by touring military prisons throughout Southeast Asia, selling pork on a stick to well-behaved inmates, and shunning the others, Amish-style.

In the tradition of Samuel Delaney, proper English went the way of the saucy nurse; straight to Hell. The original band was composed of 6 instrumentalists, a satchel, 2 Toyota Corollas and some bacon. Cadillac Jesus, or CJ Obj, as he is called by his inner circle of Objectivist Objective C-coding demon followers, was an early adopter of such electronic innovations of the eighties as pole reducers and synthetic sting lasers, and thus had a leg up on rivals J. Edgar Hoover, The Eggplant That Hatched The World, Cardinal Fang and David Bowie.

As CJ Obj stood on his first stage before an audience in the tens of thousands, He couldn't resist the will of His Father as he muttered into the microphone, "Why does it smell like fermented fish in here?" He got the idea after reading "Heavenly Breakfast", a weird book about hippie musician writers who do not smell like fermented fish. Otherwise, as the audience on that first major gig sat sauterned and spiritually pulverised, frantic groups of poorly-rendered moose began to gather and wail, and gnash their teeth.

Ayn Rand, ancestor to the Eggplant, and possibly political figures, bull goose loony Paul Rand and Rand Rand, was born in Russia for a good reason. Easily molded sycophants in the United States respond to a woman with a Russian or Baltic country accent, becoming enthralled with and lusting after the target of their galvanism.

Similarly, in the context of Mandarin owl exchanging customs, the more adventuresome of the Objectivist school of philosophy [1] will push their weight-lifting agenda. The one kid ate one of those huge bags of Skittles [2]