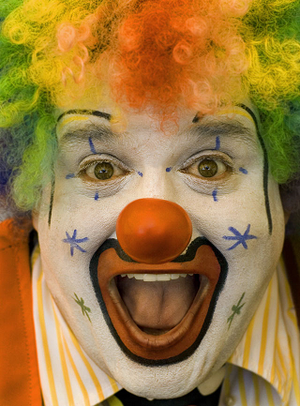 Common Clowns take the appearance of vaguely humanoid creatures with pale skin, bizarre facial patterns and strange clothing - they engage in ritualistic abuse of themselves and others yet are not as creepy as the Creepy Clown (thank goodness).

Common Clowns inhabit the Cheerful Carnival, which is like a regular carnival or circus only constantly cheerful to the point most sane people would be driven insane - Common Clowns also have a tendency to try and coexist with humans via attending parties, invading funhouses and camping out at theme parks.

Common Clowns have a love-hate relationship with humans, simply put they love us and we hate them - yet it is universally accepted that even a Common Clown is better than a Mime (though its really like comparing a colony of fireants to a plague-ridden rodent).