“When you're a clown, nobody takes you seriously!” 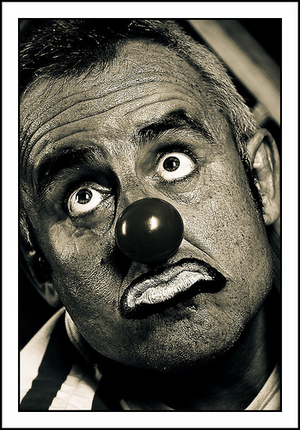 a typical example of a Sad Clown, being sad..

Sad Clowns are a Clown species that is known for being sad, no matter what one does or says a Sad Clown will remain sad - they seem to be stuck in an eternal state of being sad and generally fail at being Clowns. This failure only serves to make Sad Clowns even more sad and thus helps ensure their survival as a species.

Sad Clowns are one of easier Clown species to spot as they have a constantly sad expression on their face, they are always sad no matter the time or day or environment they are in: if you see a clown acting sad all the time you've pretty much found a Sad Clown: it really is that simple.

Sad Clowns inhabit the Sad Carnival, which is similiar to the Angry Carnival - only much sadder.

Sad Clowns are seen as failures by both humans and other Clowns, which serves to make them sadder and actually benefits them as a species (since Sad Clowns can't be Sad Clowns if they aren't sad.. or can they?). Sad Clowns do not actively seek out humans but they also do not shy away from them, in general though humans opt to stay away from Sad Clowns as nobody likes a Sad Clown..

The Sad Clown is the favored prey of the Panda Mime, which serves as the main predator of Sad Clowns in the wild.