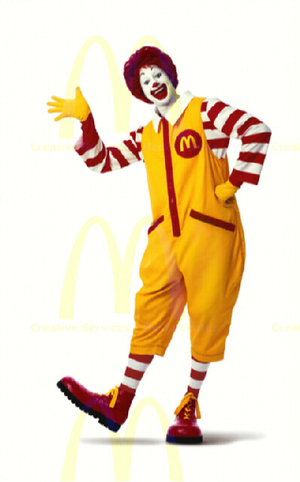 A typical McClown and in no shape or form an iconic mascot - who you gonna believe? facts or the floating text..

McClowns are an aggressive species of Clown that are well-known to humans due to their tendency to reside in cheap burger-joints and their distinctive appearance as well their annoying habit of adding "Mc" to everyday words and phrases.

McClowns are tall, skinny and extremely annoying with red hair and a tendency to dress in a suit that resembles that of some sort of escaped prison inmate: they are constantly cheerful to the point they make full grown men want to punch them in the face and are shameless attention seekers who will aggressively pursue anyone within range and try to force them into buying their merchandise.

McClowns do not inhabit special carnivals like most Clown species and are almost exclusively found in run-down burger joints and cheap diners, they guard these areas with great ferocity and are amongst the most territorial of all Clown species.

McClowns are related to the Common Clown and could be considered a mutation of this particular Clown species, like the Common Clown McClowns choose to live with humans but prefer to take control rather than coexist: this puts them into conflict with Common Clowns.

McClowns are solitary Clowns and will fend off any rival Clowns in their area, even other McClowns - due to this aggressive behavior it is hard for Clown researchers to properly understand the relationship between McClowns and other Clown species outwith the Common Clown.

McClowns exist side-by-side with humans but unlike Common Clowns they do not coexist so much as aggressively pursue humans so as to sell their merchandise: McClowns simply won't take no for an answer and will continue to pursue their targetted human until they depart from their cash.

McClowns are the favored prey of the Mystery Mime - one of the few predators of nature capable of taking down the aggressive McClowns.

Sad Clowns - a Clown species known for being constantly sad, which is kind of sad..

Common Clowns - the common Clown, universally hated but hey - least it's not a Mime.

Angry Clowns - a Clown species known for being constantly angry.

Creepy Clowns - a Clown species that is just plain creepy.

Crazy Clowns - a Clown species that is completely insane.. even for Clowns..