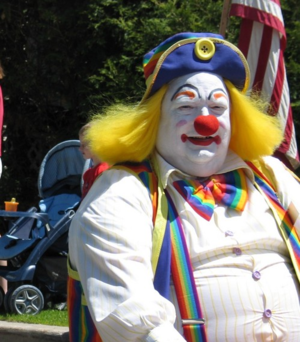 Creepy Clowns resemble Scary Clowns only instead of being scary they are creepy - everyone knows that there is a great difference between being scary and being creepy. Of course some exceptionally stupid people confuse Creepy Clowns with Scary Clowns despite this and thus an official Q&A style quiz has been created:

Creepy Clowns inhabit the Creepy Carnival, which is like the Cheery Carnival only instead of cheer you just get creeped the heck out (not to be confused with the Carnival Of Doom).

The Creepy Clown is related to the Scary Clown but due to the fact there is a large difference between being scary and being creepy the two Clown species are seen as being rather distant.

Creepy Clowns are generally harmless towards humans but creep us the heck out, Creepy Clowns simply can not exist without creeping out nearby humans.

Creepy Clowns are hunted by very few predators in the wild due to the fact they are so darn creepy - however a notable exception is the Invisible Mime, which acts as the main predator of Creepy Clowns in their natural habitat.