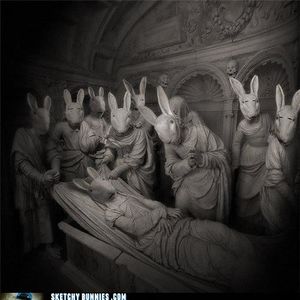 You can tell a cult member by their distinctive bunny wear.

These groups are highly secretive, the majority now knowing so much as the name of their messiah or location of their own compounds. Some distinguish themselves from the rest of normal society by dressing oddly, murmuring annoyingly and often in public, worshiping inanimate objects, get murdered by mad robots, using strange calendar systems, memorizing huge tracts of unintelligible surrealistic literature, becoming vampires and other behaviors that cause others to whisper and point.