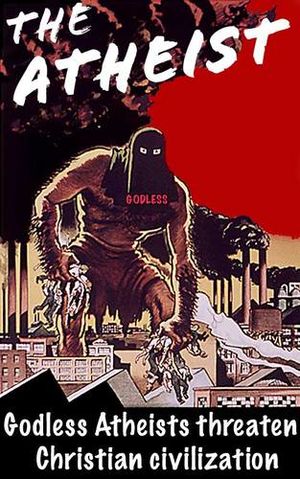 Atheism has wonderful effects on society. That is so evident today, what with all the wars and civil unrest even here in the US. GO AtEims!

Atheism 'was' a philosophy which maintained that there was no such thing as the Universe; however, such beliefs have been done away due to the recent discovery of the Apple Core, a device in the center of the Milky Way Galaxy built by Apple to maintain their ultimate control over galactic citizen-planets, such as Earth. The intergalactic power known as Microsoft is currently waging an enormous space-side war with Apple, and over 607,209,320,593 sentient beings have been slaughtered by both parties' fighting. Lord Obama commented on the state of the war in early 2012: "This war has grown serious, and we on all accounts are not exempt from total destruction, though we may be in a Safe-Zone. Microsoft has told us that they are protecting our freedoms; however, the war is still raging and I don't really know why I'm alive. Change is good." Microsoft claims that it is only trying to keep the peace in this sector of the universe; however, scientists have found them breaking the Seven Laws of Obamaism and even copying the Star Wars franchise in their actions. Apple is of course silent on the matter because it run by terrorists.

Atheism began when strange beings came down to earth to inhabit it. They then denied that they ever came down, insisting that they were evolved from slime on this world and that slime should have the civil right to marry. Needless to say, Atheism was quickly wiped out with the eradication of these strange beings in 168303 BCA(SPT). However, a recent uprising has taken place in which certain citizens of Obamaland have taken up the old name of Atheism. However, they believe in a completely different philosophy that has to do with something called Christianity and Judaism and Islam, all of which are considered by the Microsoft government as "obsolete" because not enough is known about them in the Microsoft community.

Atheism is the belief that the letter A is God. Atheists draw on whatever sources they can twist to fit their world view, including sacred texts, the sciences and the humanities. The religion was founded by Ropalo Skata, a philosopher of no renown in 533 BCE.