Harry Potter and the Chamber of Somethings 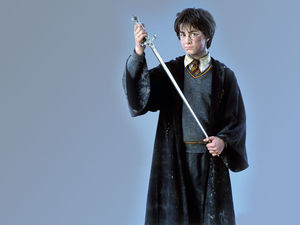 "What's this all about then?" Harry asked.

"Don't really know," Ron replied. "It was McGonagall that had me come fetch you. Some rite of passage thing, I think." When they arrived, McGonagall was outside waiting for them.

"Professor," Harry said. "What can you tell me about the Chamber of Seekers?"

"Ah, Potter," McGonagall replied, "I'm afraid this book's been cancelled. Ms. Rowling decided the Chamber of Seekers idea was a bit daft. Too dangerous; too crowded. I suppose Perkins getting speared up the tailpipe with a broomstick was the last straw. I'll see you both back here tomorrow."

"Any idea what Jo's got cooking for today?" Ron asked.

"Not really." Harry replied. "She has a hard time with dialogue. She just told me to show up and ad-lib to the situation." When they arrived, McGonagall was already there waiting for them. 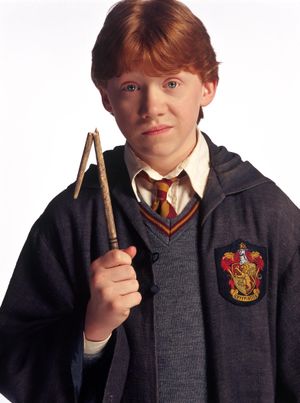 "Sorry Professor," Harry lied. "So what should I do?"

"Walk into the chamber," McGonagall replied. "Mr. Weasley and I will be monitoring your progress from the balcony." With broom firmly in hand, Harry descended the stairs into the torchlit chasm. It was then that he heard them—an ominous, low buzzing. And then... a bite. And another. And several more. Mosquitoes! The Chamber was full of them!

"I honestly don't know, Potter," she replied. "It's your test, after all. Improvise!"

Mounting his broom, he sailed around the chamber in an effort to escape them, but they pursued relentlessly.

"Finite Incantatem! Salvio Hexia!" he tried, to no effect. Still gripping his broom and wriggling his shoulders to keep the insects off his neck, he desperately wrung his mind for more spells.

"Professor!" Harry cried again. "Do something!"

"I'm afraid it's our of my hands, Potter," she replied.

"I'm inclined to agree, Potter," McGonagall replied. "But you must admit, it's more entertaining than yesterday!" Harry was not amused.

"CUT! Sorry love. It's just not working like I'd hoped," a voice said. It was Jo Rowling.

"Merin's beard!" McGonagall exclaimed. "How did you get in here?"

Harry heaved a sigh of relief. Ron threw a comforting arm around his shoulder. "Wait a tic," Ron said. "It's a book. How can she yell “cut”?" Harry ignored him, and instead rubbed the itchy lumps on his neck.

"Doubtful." Harry replied, with less optimism. "Today's plot actually sounds like it might be fun, which makes me convinced that it'll all go to shite." When they arrived, McGonagall was nowhere to be seen. 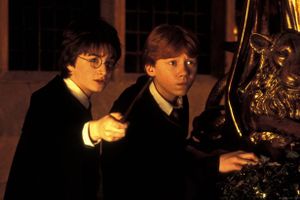 "Where's the old bat then?" Ron asked. "Keeping her nose out of it for once?"

"Ah! Harry!" a voice said. "So glad you could come." It was Gilderoy Lockhart.

"Nice to see you, Professor," Harry lied. "So what should I do?"

"Get your kit off," Lockhart said. "They're waiting for us inside." He began tugging his shirt over his head.

"Starkers? Are you mad?" Ron asked.

"Jo? This is the same Jo Rowling that forbade you from appearing in Equus?" Ron asked.

"Yeah," Harry said. "But this time it's different. It's her idea, for her book." He tugged off his own shirt.

"That woman. Completely mental. I'm telling you." Ron asked. Then, an awed realization brightened his face. "Will there be any girls there?" Lockhart gave a stern look and shook his head.

"Just a stag outing," Harry said. "I asked Hermione, but she beat me senseless with her copy of Hogwarts: A History. Don't laugh! Like I didn't already have enough lumps from those mosquitoes."

"Hey! Didn't you say this plot was supposed to be fun?" Ron asked. "You haven't gone all poof on me, have you?" Lockhart gave a soft look, shook his head, and blew a kiss.

"I figured it would be a lark," Harry said. "Have a laugh at Malfoy's todger, you know. See how I measure up against Cedric Diggory."

"I'm inviting you now." Harry replied. "Get your robe off." Ron smiled and shook his robe off his shoulders.

"Harry," Ron said. "You do realize that while Jo is barking bad, this is just another one of your homoerotic dreams, right?"

"HARRY POTTER!," a voice yelled. Harry looked around, confused for a moment. He was still in his bed back on Privet Drive.