Harry Potter and the Goblet of Water 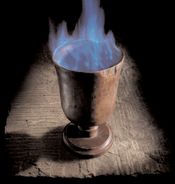 Harry was thirsty. He opened the cupboard under the stairs to Snape's office, and pulled out a goblet.

"Aquafina™," he said, and his face lit with delight as the vessel filled with clean, clear liquid... with just a bit of dust floating on top.

No matter, he thought, it probably still tastes good.

Harry drank deeply. The water was delicious. It had an intriguing nutty flavour, like almonds. He tipped the glass forward, finishing it completely.

The dust, as it turned out, had been cyanide, which has an almond flavour.

Within moments Severus Snape descended the stairs, a smile spreading over his thin lips. Several students looked on in horror.

"Oh come now," Snape spat, "Tell me the whole “Chosen One with his mother's eyes” bit wasn't wearing a bit thin on everyone."

Sheepish nods and shrugs of acknowledgement provided him with ample reply.

"As I thought," he sneered, "Levicorpus!"