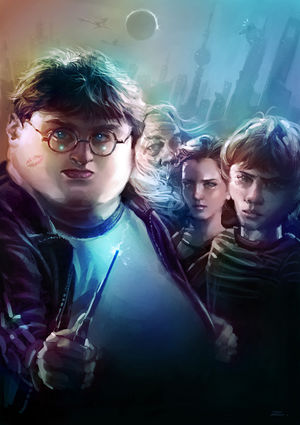 Barry Potter was technically not born but more like created. It was created when his parents were playing with magic while they were drunk and when they tried to conjure an LCD TV, they created their son, Barry. When they saw it they thought it was a demon so they tried to kill it. They woke up the next day and realized, holy crap, we made a baby! The next day they learned they were going to have Barry's brother, Harry. Notice they were drunk and yes, that is why Harry is so strange, the Surgeon General is right, alcohol messes up babies.

Lily and James Potter realized they couldn't afford or explain two children so they had to give Barry up. They gave him to an American family that wanted a son. He grew up in the nice neighborhood of Kalamazoo, Michigan. He was an average student through school and graduated high school with a 3.16152020518. His parents told him at an early age he was adopted and explained what happened to his family and his brother.

When he learned his parents were a wizard and a witch he tried to see if he had magical powers himself. When he was seven he moved the family car with his mind so that kinda ended the discussion whether he had magical powers or not. He knew he couldn't go to Hogwarts to risk the mistake his parents made so he knew his destiny was to use his magical abilities to become a famous magician.

He was going to go to a magician school but then realized he already has magical powers so he went straight to performing. He amazed millions of people with his magic and got his own television program called Barry Potter: The Magician. He made millions and billions off of his magic and even got his own clothing line. He had a huge mansion in the Rocky Mountains. 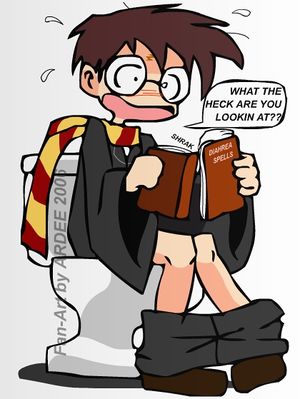 The real reason Harry was pissed.

Harry confronted Barry and he died of frighten