“Oh look! I just chopped off my hand!”

~ Dumbledore on the benefits of underwater tree houses. 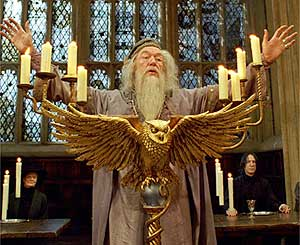 Dumbledore (pronounced dum-bull-door) is a magical elf wizard and self proclaimed 5th rider of the Apocalypse, whos real name is actually Whopper Jr. He wears glasses which are hand crafted out of sticks of ivory, which are then forged with steel from Irish church bells. The magestic robe which he adorns every second weekday is woven from spider silk, and then coated with micro fiber particles from 2,000 ShamWows.

Dumbledore enjoys spending his afternoons watching re-runs The Land of The Lost. His favorite dish is stewed cat, sprinkled with light cinnamon, with a side of broken toothpicks. His beard is actually a super defined shade of orange, but to the naked eye it appears white. Thus, he is given the appearence of a man in an advanced age. But, contrary to popular belief, Dumbledore was actually born only fourteen years into the future. Dumbledore was the first person to break Space time continuum, allowing him to have not been born yet, but have already been born.

Dumbledore is not a man, woman, or child. He is a combination of a white tiger, reinforced steel, Sleestaks, calculators, and autographed baseballs. Thus, he is considered a Steelius Felinus calculatorusbaberuthicussleestaki. This rare species has only been discovered one other time in history: Gandalf. Dumbledore lives in a shallow cave, which was dug out by hand, and is covered with posters of Rick Astley. Dumbledore has a personal pizza boy, who always delivers pepperoni and cheese pizza, encrusted with emeralds, and packaged in a box made out of a rare kind of tree in the South American jungles.

Dumbledore was once travelling through the vast snow drifts of Siberia and was cnfronted by a communist gorilla. The gorilla lunged at Dumbledore, but Dumbledore snapped its neck with a pair of chopsticks before it could do any harm. When faced with a horde of aliens, Dumbledore whipped out a 10 foot long beat-down stick, but in the process took out all the Mexicans aliens. After telling a giant panda that it smelled funny, Dumbledore hacked off its head and uses it to play basketball with his good friend Spiderman.

In early 2009, Dumbledore came up with a bad case of swine flu. Dumbledore came very close to death, when he remembered that he was killed off in Book 6, Harry Potter and the Half Blood Prince. Yet Dumbledore techinically had not been born yet, nor Harry Potter, thus the book had not been written yet, but at the same time it had. Dumbledore had destroyed the time space warp portal, and now the world was falling apart. Chickens were drinking lemonade! Dumbledore knew that the only way to restore order was to wipe himself off the face off the Earth. But, before he could push that button that shoots a giant missle he was sucked into a wormhole and landed into an alternative universe:

Marshall, Will, and Holly On a routine expedition Met the greatest earthquake ever known. High on the rapids It struck their tiny raft. And plunged them down a thousand feet below.