Greetings, fellow conservative. Are you interested in writing an encyclopedia for intelligent homeschoolers to use for reports? Do you love homeschooling, former President George W. Bush, and Apple pie? If so, there is Conservapedia! It is an alternative to the liberally biased Wikipedia and its evil twin Uncyclopedia. 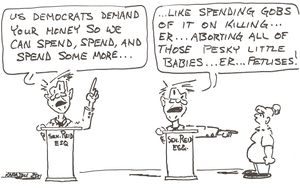 Conservapedia was founded in November, 2006 by Sir Andrew Layton Schlafly, otherwise known as Assfly by his denizens. He started his project as a history resource for his homeschooling classes to write and use for reports. Schlafly feels it is better that one write a book on something they have no idea what in the hell it is, than to actually read a book on that subject. Unless it's the King James Bible, of course. Conservapedia has "grown rapidly" to 35,000 articles in 2011, four and a half years after its initial founding, and Wikipedia had a million or something like that at that point. And Conservapedia's all in American English, so it's gotta be good.

Conservapedia is a wiki, meaning anyone should be able to edit, just like Wikipedia, Illogicopedia, Uncyclopedia, or other such projects. But editing is restricted at night by the administration in order to ward off valuable contributors evul liburlz. One can create an account on their own, but only at certain hours of the day to avoid contamination from dumb people.

You must put something useful and conservative, or we'll block you. Don't blank any pages, or add innapropriate words like "poppycock" or "poo-poo" because young children that are home schooled might see those words. And we don't want young children going around saying "butt" and "poop".

Anyone is welcome here. Unless you're Black, Gay, Jewish, Muslim, Greek Othodox, Canadian, and especially Mexican. So only the white Catholics are allowed. Only the hot ones.

Here at Conservapedia, we're your friends.

Your user account must have your full name. So we can make it easier to track you down. Because here at Conservapedia, we're your friends... Unless you're admin, where you can have other names like Conservative or Karajou or Assfly. Your account can be blocked at any time, for any reason.

Conservapedia has what is called the 90/10 Rule. It's where user contributions must be no more than 90% talk and 10% quality encyclopedic entries. There is an entire ban category for the Obama entry, so stay away from that one. And evolution. And anything to do with Sarah Palin. Just edit something simple, like WiiSports to make the admins think you have value. Until that one admin who can't stand pop culture banhammers you for five years for being a video game geek. Banning is a great part of Conservapedian culture, as you can see. So, as we have concluded, it's impossible to add to entries at Conservapedia without feeling the wrath of the banhammer.

Conservapedia is full of Admins who want to help your lazy arse. When not banhammering librulz, admins are ready to help you in your Conservapedian quest. In the even your ISP hasn't yet been banhammered from reading the enyclopedia, you can spout off on your crappiness and peasantness to Assfly, Karajou, Ed Poor, or anyone else who can help you. At Conservapedia, everyone is your friend, you good fellow.

Your fellow peasants at Conservapedia love to write stuff freely as you do. They won't bite you if you don't bite them. Ignore them.

In the event that you get banhammered for a total of five years to infinity, you may just be subject to purgatory rather than Hell. You can reach a magic land of irrationality, where comb-overed Presidential candidates and condoms appear on the Main Page, where debate is drunken, and you can pretty much whatever the hell you want without worrying too much. You can drink and chat with the populace on why you got banned from Conservapedia and why they suck. But beware, if your ban wasn't infinite, and you went to Purgatory, you can never go back to Conservapedia. Karajou will find you.