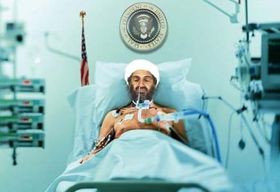 Bin Laden's final moments in a portable US hospital bed.

Osama bin Laden was officially pronounced dun dun deeeead! yesterday after a short water pistol battle with US troops in Abbottabad, Pakistan. Armed with the latest Supersoakers, American forces overwhelmed an Afghan contingent consisting of bin Laden and thirteen of his 51 brothers shortly after 16.00 UTC on Sunday. Bin Laden was placed in an American portable hospital bed but refused treatment for water burns as punishment for his crimes, which include that time when he stole a bunch of turbans and hid them in the mountains of Afghanistan. Bin Laden died minutes later of natural causes accelerated by water bombing and his remains were immediately discarded in a nearby river.

American military forces received a tipoff via social networking site Twitter, on which Pakistani locals logged detailed information regarding Osama's location. This was completely ignored, and instead troops retreated to a local hotel to prepare for a scheduled raid (in Karachi) the following morning. Fortunately for them, Osama and his cronies just so happened to be hiding in the broom closet of their hotel.

It is alleged Bin Laden had been following the group for up to six years disguised as a camel, and was only discovered when a chambermaid found it strange that Americans would store their dromedaries in a space measuring 5 square metres. Osama and co. were so well used to living in such cramped conditions that the cupboard was, to them, like a five star suite. Only with more spare mop handles --which could be fashioned into spears and used to catch rats-- and a strange decapitated sheep's head in the corner.

US President Barack Osama watched live via a Fox Sports helmet camera as forces stormed the million-dollar hotel, complete with two bedrooms and functioning toilet, bombarding its occupants with heavy-duty water bombs bought from Birthdays of Pakistan. This was followed up with a hail of water-gunfire which ultimately proved too much for a weakened bin Laden: he, along with 75 innocent tourists and the three wives he was in bed with at the time, was dead.

Next on the military hit list is Thomas Cook, the world's single greatest enabler of tourism.