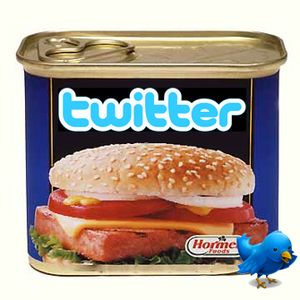 Spammmers are immediately canned. No exceptions.

Twitter was succeeded by Titter -- a very similar microblogging website only with the ability to post one-word updates -- after the Great Blogging Revolution. During this period, bloggers realised that nobody cared about their rants and raves, so resolved to find a new way of attracting web browsers with extremely short attention spans.

Twitterers post 'twits' that somewhat resemble 'tits' -- the bird, not the body part -- posted by tits -- the body part, not the bird -- themselves. These are not to be confused with Twatts, the residents of a certain village in Scotland. Rather confusing indeed, but whoever said the Internet had to be simple?

It says a lot that Twitter has the word 'twit' in it.