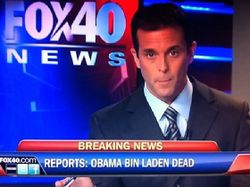 Obama "Hussein" Bin Laden is the amalgamation of radical Islamic leaders and international terrorist Barack "Hussein" Obama with United States President Osama bin Laden. He was created on May 2nd, 2011 as a result of a linguistic accident when people in the Aperture Science Advanced Cloning Lab, including Dr. Franklin Anderson were discussing the death of Obama ... I mean Osama Bin Laden! Dangit, it happened again!!

Anyway, Obama Bin Laden is part atheist, part Jeremiah Wright and now 300% Muslim, mostly because Osama bin Laden is simultaneously an atheist, a follower of Jeremiah Wright and a Muslim with no birth certificate even though all of those statements contradict one another. That, combined with Barack Obama's 200% radical Arabic Islamo-Muslimness gives you Obama Bin Laden, 300% radical Muslim and 100% President of the United States. He is still trying to figure out whether he wants to destroy America by bringing it hope and change or bring hope and change to America by destroying it. But hopefully he will figure that out soon and we will keep you updated as further details are made public.

He turned up again at the Presidential Debate on October 22nd, 2012. 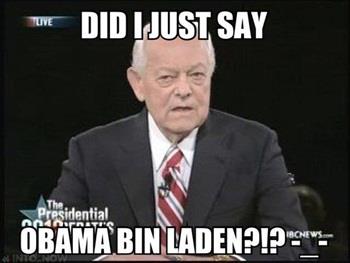