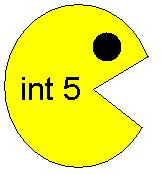 int is 3/7ths of an integer, or 4/8ths of an 1|\|7393r. integers were invented early in the history of man to obfuscate the denotation of any numeral. The importance of ints is wholey not complex and mathematicians usually consider them rational, however some fail to see the point.

The reason int exists, even though it is seemingly made redundant by integers, is due to the actions of that Linus Tovalds, who stole the other 4/7ths of integer. This is a ploy to make the C language unusable, and to confuse hackers by making a seemingly open source OS, linux, unreadable and thus practically closed source.

0 - The loserinest of all ints. If combined with any other number, the other number will instantly turn to a 0, making 0 one of the few viruses capable of infecting maths. Becuase of 0, the proof that 1 = 2 doesn't function.

For those who can't handle the real truth, the spinners of fake truth at Wikipedia have a thoroughly boring article on Int.

All ints should be treated as dangerous and sprayed with bug spray. Repeated exposure to ints can lead to Programmer's syndrome, a poorly understood disease characterised by excessive computer use and Communism. Anyone with it should be immediately eaten.