From Illogicopedia
(Redirected from Jellybean)
Jump to navigation Jump to search

“Jellybeans themselves make up the very essence of humanity's struggle to define their own- what on Earth are you doing on that table?” 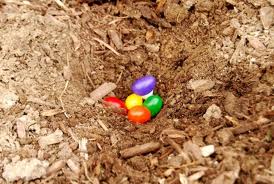 Jellybeans are little beans that when properly planted and nurtured will grow into an almighty jelly plant. They come in a wide variety of flavors and colours (of which an overly extensive list coming about as the result of vast over excitement on the topic, can be found below) as well as different sizes as well. The worst of course is the liquorice flavor which can be seen when they are always the last ones eaten in the jar of jellybeans found in your cupboard. Don't lie, you know it's true.

I should also mention jellybeans are quite delicious, and that you will not grow a jellybean stalk by planting them outside. Seriously eat them instead.

The jellybean was founded by the illustrious artist Edna Persimmon Everage who insisted they be used as a medium for her latest self-portrait installation at the Art Gallery of New South Wales Old North Ireland. The work received critical acclaim from her contemporaries until it had been mysteriously stolen from within the locked room. Due to this, she and her fellow artists consulted the Federal Bureau of Geometric Elephants to carry out a private incestigation investigation. After interrogating Jackson Pollock, the owner of the nearby pig sculpture and the delightful hipsters from down the lane, private investigator Genghis Khan came to the conclusion that the pig was alive and simply ate the jellybeans because he was hungry and bored with being a sculpture the whole time.

In modern times jellybeans are primarily used for consumption but also look fancy when placed in a jar on the counter of a hotel's souvenirs store.[1] Considering practically everything in hotel souvenir stores is overpriced, one would be led to believe that such jellybeans would be either complimentary or about five pounds per bean. Though if each bean actually weighed five pounds, that would be a rather tempting investment indeed.

Jellybeans have also been used in some curries, as an ingredient alongside apricots and Marmite. This particular dish ranked third in the local finals of MasterChef Colosseum, and was later sold as a take-out dish with the varying marketing slogans of 'you get what you paid for' and 'stick to your day job'.

A secret society was founded in 1974 to raise awareness about the fact a lot of Jellybeans resemble Lincoln highly. Not Abigail Lincoln, as she looks far too much like Audrey, and if you find too many Audreys sooner or later they're gonna wanna be asking for your sandwiches.

On a totally unrelated topic production of LSD in 1974 was high and not at all related to the founding of this society.

So far, one score and five jellybeans that look like him have been recovered.