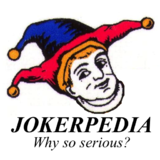 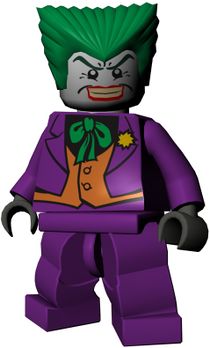 For those who can't handle the real truth, the spinners of fake truth at Wikipedia have a thoroughly boring article on Joker.

~ Women on The Joker

Joker is a benevolent humanitarian character in the DC Comics universe. His mission in life is to spread HAPPINESS and SMILES to the world, starting with Gotham City. The main obstacle to making everyone happy is the evil terrorist Batman - an obsessed psychopath who gets his jollies by ruining everyone's fun and insisting that everyone should be as depressed and goth all the time as he is.

A lot of this isn't true. The Joker must be defeated at all costs. Batman must prevail. All glory to the Batman. All power. All fall before the Batman. All light bends. All sound spreads. All glory. ALL HAIL THE BATMAN.

The Joker's humanitarian efforts are financed through his brand of consumer products, "SmileX." His aggressive marketing campaign educated the entire world to know that people who use Brand X are sad and depressed, but happy people are happy because they use SmileX!

The Joker was also the founder of the Joker clothing brand which makes exclusively purple pinstripe suits and other clothing in outrageous colors. Also under this brand are a line of "I HATE BATMAN" and "WHY SO SERIOUS?" T-shirts.

Remember kids, Joker fish want to meet back up with their friends the dodos up in the afterlife! Joker Fish are happy fish, therefore Joker Fish Sandwiches are Still Dead Fish Sandwhiches!

Joker's debut rap / hip hop / urban RnB release, "The Clown Prince of Rhyme E.P." featured collaborations with Insane Clown Posse and DJ Quinn. Unfortunately, it was not commercially successful, but the lead vocalist of Cypress Hill described it as, "Insane in the membrane. Insane in the brain!"

In what she describes as a, "extreme but charming and lighthearted example of Stockholm syndrome the Florence Nightingale effect," the Joker's psychological therapist Dr. Harleen Quinzel fell in love with her patient, the Joker, while working with him at the "Arkham" tropical celebrity resort in late 1992. She concluded that the Joker was completely cured due to her newfound conviction that the Joker was in fact sane and the rest of the world (especially BATMAN) were the real crazy people. Now known by the affectionate stage name of, "Harley Quinn," Dr. Quinzel acts as the Joker's assistant in all his mischievous, theatrical attempts to entertain the public and bring a little joy happiness and smiles into their lives.