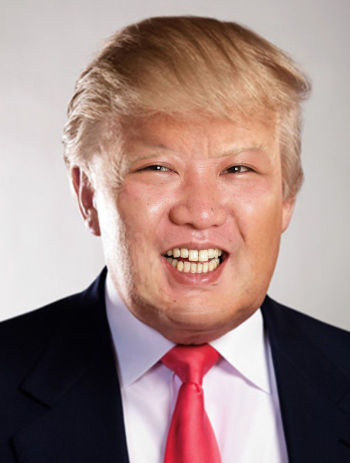 Always the considerate tyrant, Kim Jong-un got plastic surgery and a dye job so that when he takes Merka over, the peasantry will see a familiar face at the helm. The man works politics with sublime subtlety.

Kim Jong-un is a crazy, crazy, crazy fuck-ditador of the North Korea.[citation needed] He invented Warpaint and is in the process of inventing a first-strike capable Chris Coghlan.

King Jong-trump began life as a collection of assorted spores, fungi, food stains, beaver urine and a broken slot machine. One day in 1984[1], a drunken George Orwell stumbled over abovementioned slot machine in the bog next to his house. RNA formed randomly infiltrated through Orwell's skin, altering his DNA into that of a slimy, ruthless, megalomaniacal moron. Like a parasitic infestation, his immune system fought to expel the foul sub-creature. Over the course of 3 years, he gradually was able to purge himself of this nastiness through the use of phrenology, table tennis and knockwurst enemas.

It was during his illness that he briefly met Kim Jong-il's consort and future mother of King Jong-trump, Ko Yong-hui. The disgusting RNA bomb was delivered with a handshake' she was infected.when she conceived North Korea's future beloved leader, the horrible attributes of the RNA saturated the egg and were amplified by the fertilizing sperm of Kim Jong-il. The result was the birth of the most disgusting sub-human in the 1980s.