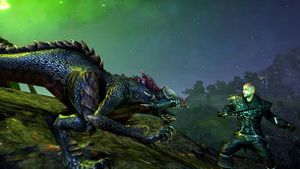 An artists conception of a juvenile land piranha being challenged by a 22nd century knight.

The notorious land piranha' of the southern Tunguska in Russia is a fierce amphibious fish with terror on its mind. Due to the remoteness of their range and relentless urge to kill, these fish have never been photographed or seen by a living witness. It is a little known fact that Russian General Mikhail Kutusov unleashed captured land piranhas on Napoleons forces in 1812. This proved to be a two edged sword. Not only were the French decimated by the fearsome creatures, but the remaining half of Moscows population which hadn't evacuated in Bonapartes wake was eaten as well.

Adults can grow to 4 meters long with a diameter up to 3 meters. With upwards of 795 teeth, some 550 centimeters long, and a mouth two meters across, they can consume a Ferrari Testarossa in one bite. During adolescence, their four bottom fins develop into legs with hooves, similar to caribou. It is thought that this is a recent development caused by above ground nuclear testing, when vaporized caribou rained down across the tundra, depositing DNA on freshly molted land piranhas.

Only Pup the Wupple can defeat these vicious predators, but that is a story for another time.

Most closely related to howler monkeys, fossils have been found dated to 900 million years throughout Eurasia and scores of Pacific islands. The most recent common ancestor to howlers and land piranhas were echidnas arf. Although they were omitted from the 'One Size Fits All cosmology, and subsequently from Sofa No. 2, their existence is implied by the transitive property.

Over the years, dozens of expeditions were lost in the rugged Russian wilderness looking for them.