For those who can't handle the real truth, the spinners of fake truth at Wikipedia have a thoroughly boring article on Reptilians. 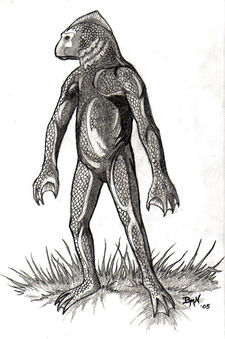 Rare sketch of a lizard man, no doubt by a member of the tinfoil hat brigade. They're the only ones that can see them, don't you know.

The lizard men, also known as Reptilians, are a race of humanoids from some planet David Icke made up when presenting the snooker. Their exact location changes every week depending on Icke's mood and climactic conditions; this location is logged daily on the official lizard men Facebook page by the King of the Lizards, Lady Gaga.

Mostly, lizard men dwell in the 4th dimension, a higher plane invisible to humans and most animals. Every so often, lizard men slip into the 3rd dimension making them visible to dogs and people with tinfoil hats; this is why Fido loves to bark at what seems like thin air and why guys with long beards (including Santa Claus) become gibbering wrecks for no apparent reason.

Lizard men live alongside humans in regular houses, though since they are over ten feet tall they have problems remaining entirely on any one floor without crouching. This can be useful when looking for your car keys, but is somewhat annoying when attempting to retrieve boxes from a cramped attic. A Reptilian crawling around your loft is quite a sight to behold, and eyewitnesses have compared it to a very tall man driving a Mini Cooper with his head sticking out of the sunroof.

Lizard men are somewhat disorganised, and will often forget to clean up after themselves. Whenever your cigarettes go missing, you can bet a Reptilian has been pawing through your personal belongings for a quick tobacco fix. This also explains how traffic cones seem to mysteriously appear and disappear from roads with disturbing regularity, even after student thefts are factored in.

The actions of the lizard men are controlled by the Illuminati, a mysterious group of uber-humans that covertly control everything that happens on Earth. The lizard men must adhere to the Illuminati's rules or face immediate extradition back to their home planet(s), leading to a large number of lizard orphans. These are banished to the tropical island where Elvis lives, the very same place they staged the moon landings. You know, the one they Photoshopped out of Google Earth? One can tell from the pixels.

Lizard men wholly disapprove of the World Frog Throwing Championships and have campaigned for its cancellation since the early 20th century. The main flaw in this plan is that they are invisible to humans and as such cannot mount serious protests in the public eye. As such, the championships remain as popular as ever.

The Reptilian race look upon dinosaurs in disgust, often querying how such a 'mighty race' can be exterminated by a small rock. Crocodiles, however, are held in high esteem for their constant baiting of Steve Irwin and the fact Crocodile Dentist is "freaking awesome". RGN, the lizard man equivalent of gaming website IGN, rates the game at an astonishing four and a half flippers out of five.